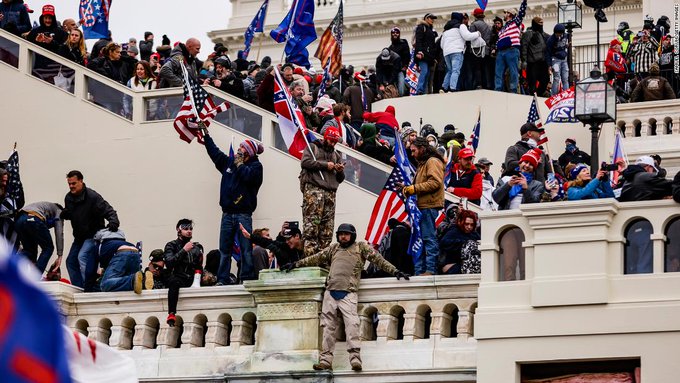 Reuters – Some of former President Donald Trump’s most prominent critics, including Republican Representative Liz Cheney and the Democrats who led the two impeachments against him, were named on Thursday to serve on a special congressional panel probing the Jan. 6 riot at the U.S. Capitol.

House of Representatives Speaker Nancy Pelosi announced eight members of the committee that will investigate the events leading up to and on Jan. 6, when Trump supporters stormed the Capitol in an attempt to stop Joe Biden from being certified the winner of last November’s presidential election against Trump.

Five people died as a result of the violence, including a U.S. Capitol Police officer. Other law enforcement officers suffered severe injuries as they battled the angry mob.

Just before the attack, Trump delivered fiery remarks at the White House and then encouraged his supporters to march to Capitol Hill.

Cheney was stripped of her House Republican leadership position in May after voting in January to impeach Trump and continuing to repudiate his false claims that the 2020 presidential election was stolen from him by massive voter fraud.

Multiple courts as well as the U.S. Department of Justice have rejected Trump’s allegation.

While Cheney did not attend the news conference with Pelosi, a Democrat, and the other seven newly-named committee members, all of them Democrats, she issued a statement saying, “Congress is obligated to conduct a full investigation of the most serious attack on our Capitol since 1814.”

Chairing the panel is Democratic Representative Bennie Thompson, who also heads the House Homeland Security Committee that has been looking into the Jan. 6 events.

In both cases, the Senate failed to convict Trump amid strong opposition from most Republicans.

Pelosi did not comment on whether Trump would be called to testify.

‘NOT MAKING ANY THREATS’

Behind the scenes, House Minority Leader Kevin McCarthy has threatened to strip committee assignments from any Republicans who agree to join the panel, according to a House Republican aide.

“I’m not making any threats on committee assignments,” McCarthy told reporters at a separate news conference.

McCarthy, pressed by reporters, did not say whether he will name any of the members to the remaining five seats on the panel. Pelosi noted, however, that with Thursday’s naming of the eight members, there was now a “quorum” for the special committee to conduct its work.

On Wednesday the House voted, largely along partisan lines, to establish the special committee after Senate Republicans blocked the creation of an independent commission Pelosi originally sought.

The committee will have the power to subpoena witnesses.

Republican leaders have resisted any special panel to investigate the Jan. 6 riot, noting existing congressional committees have been doing their own probes and that more than 500 people already have been charged with crimes.

A new, high-profile congressional investigation likely would keep questions alive on Trump’s activities on that day, as Republicans rev up their campaigns to win majority control of the House in the 2022 congressional elections.

But Raskin said of the new “select” committee: “We need to figure out who organized the violence on January 6. How did they organize it, and why did they organize it. What were the purposes of the different critical actors who were present on that day.”