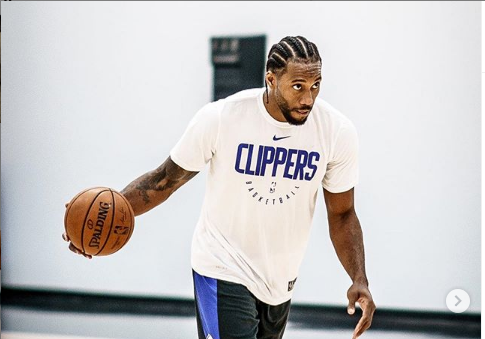 He has won basketball games, and an NBA championship, and a chance to play back home, but, he couldn’t beat a sneaker giant in a logo battle! Los Angeles Clippers’ Kawhi Leonard has lost the lawsuit he filed against Nike, according to The Oregon Live.

Leonard designed a “Klaw” logo several years ago that he claims Nike unlawfully copyrighted. He sued Nike in the middle of the NBA finals last year in June 2019. He said he created the logo while he was in college at San Diego State in 2011, drawing on his large hands, his jersey number and initials.

Nike then filed a countersuit against Leonard, saying that it holds the exclusive rights to a claw logo produced by its “talented team of designers.’’ US District Judge Michael W. Mosman sided with Nike and thereby dismissed Leonard’s lawsuit.

Mosman ruled that the logo that the Nike designers helped create with Leonard marked an “independent piece of intellectual property’’ that was distinct from the original sketch Leonard initially conceived and shared with Nike.

“It’s not merely a derivative work of the sketch itself,’’ the judge ruled after an hour of oral arguments held by phone as well as multiple briefs filed in the case. “I do find it to be new and significantly different from the design.”

“The KL, the No. 2 and the hand as expressed by Mr. Leonard in his sketch and as modified is the protectable element that appears in the Nike Klaw,” Stein argued.

But Tamar Duvdevani, a lawyer for Nike had stated that there are many differences between the rough sketch that Leonard presented to Nike with his ideas and the actual final logo agreed upon in his contract.

“One is not the same as the other,” she said.

“Authorship is more than mere directions and ideas,” Duvdevani said. “It’s clear here it was Nike’s designers who put pen to paper to fix the work in a tangible medium of expression.”

“Kawhi put his heart and soul into that design so we are obviously disappointed the judge ruled the logo belongs to Nike and not Kawhi,” Leonard’s attorney, Peter R. Ginsberg, told Oregon Live following the judge’s ruling. “We’re considering our options to protect Kawhi’s interests.”