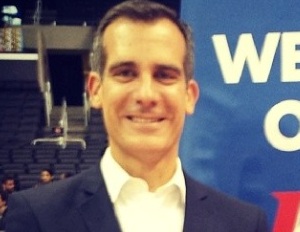 According to Yahoo Sports, Los Angeles Clippers owner Donald Sterling may drag out the legal fight to retain ownership of his team, based on what the Los Angeles mayor thinks.

“I think that he thinks that he’s going to be the owner for a long time, that he wants to stay the owner,” Mayor Eric Garcetti said. “And I said, ‘This will be a long, protracted fight and a painful thing for our city …'”

Sterling purchased the Clippers for $12 million in 1981 and the franchise is now valued at $430 million by Forbes magazine. The owner was caught on audiotape expressing racist views to his ‘assistant’ V. Stiviano (who appeared on a Barbara Walters special to defend the owner). Following the revelations of the tape, NBA CommissionerÂ Adam Silver banned the owner for life and fined him $2.5 million.

How “Money” was the First Round of the NBA playoffs? Nothing but Net.

FacebookTwitterYoutube
← How “Money” was the First Round of the NBA playoffs? Nothing but Net. ← Workplace Wellness: Employers Offer Fun, Healthy Office Perks
×
'