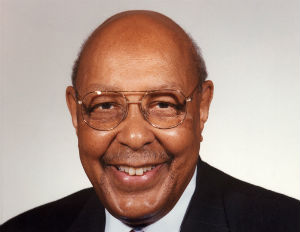 “Our family is mourning the loss of our husband, father, grandfather, and close confidant,” his familyÂ said in a statement. “He died peacefully with Jay, his wife of 55 years, at his side. During his illness, he confronted it as he did life— with bravery and strength. He was always guided by faith, while embracing the prayers and well wishes of family, friends and constituents.”

He had recently been diagnosed with lung and brain cancer, according to a statementÂ released in July.

President Barack Obama highlighted Stoke’s tenacity for overcoming challenges growing up in Cleveland, and remarked on life via a White HouseÂ release.Â “Lou leaves behind an indelible legacy in the countless generations of young leaders that he inspired, and he will be sorely missed,” he said.

Stokes, a native of Cleveland, served the 21st and 11th Districts of Ohio for 30 years. He served 15 consecutive terms in the U.S. House of Representatives.

A pivotal figure during the Cold War-era, he served as chairman of the House Intelligence Committee, led the Congressional Black Caucus, and was the first black representative on the House Appropriations Committee; a body that holds a powerful role in deciding how much funds will be allocated to authorized federal projects.Â He also drew notoriety while serving on the Iran-Contra investigative committee, conducting interrogation of Lt. Col. Oliver North.

Stokes was a leader in fighting for social, civil rights and economic justice throughout his career. As a respected lawyer, he played a role in three cases in the U.S. Supreme Court, including arguing the landmarkÂ stop and frisk case ofÂ Terry v. Ohio. He also helmed the House’s Select Committee on Assassinations that reopened investigations into the killings of President John F. Kennedy and Martin Luther King Jr. in the late ’70s. In the opening days of summer 1977 for Congress, Stokes expressed concerns about the growing challenges to government programs that would equalize opportunities for black people; particularly in employment and business:

“This drumbeat of attacks on civil rights indicates a political climate unhealthy for the country and for the preservation of civil rights gains made to date,” he told Black Enterprise magazine in its Sept. 1977 issue. “Most troubling is the manner in which members of the House of Representatives vote against code words without contemplation of the implications Â …” he continued.

In January, he was appointed as one of 18 members to the Community-Police Relations task force that is creating strategy to build relationships between police and their communities.

“I’m going to keep on denouncing the inequities of this system, but I’m going to work within it,” Stokes has said of his life’s work. “The problem is that a black man has to be extra special to win in this system. Why should you have to be a super black to get someplace? That’s what’s wrong in the society. The ordinary black man doesn’t have the same chance as the ordinary white man does.â€

He is survived by wife, Jeanette (Jay); daughters Angela, Shelley and Lori; and seven grandchildren.