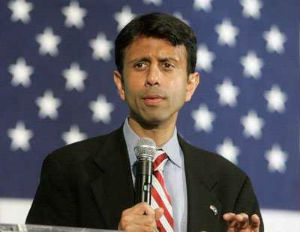 Louisiana Gov. Bobby Jindal has filed a lawsuit against the Obama administration, arguing that the administration is forcing states to adopt the Common Core academic standards in order to compete for federal grants.

Jindal is accusing the U.S. Department of Education and Education Secretary Arne Duncan for violating the Constitution’s 10th Amendment, which puts in place a balance between federal and state rights. In his complaint, Jinhal also says that the 10th Amendment prohibits federal laws from interfering with local laws over curriculum and other aspects of public education.

“Common Core is the latest effort by big government disciples to strip away state rights and put Washington, D.C. in control of everything,” Jindal said. “What started out as an innovative idea to create a set of base-line standards that could be ‘voluntarily’ used by the states has turned into a scheme by the federal government to nationalize curriculum.”

Jindal, a potential Republican presidential candidate, was once a supporter of Common Core, but as opposition to the standards grew amongst Republicans and tea party groups, so has Jindal’s dislike for the standards.

“Gov. Jindal was a passionate supporter of [Common Core] before he was against it,” Washington Post reports Duncan saying in June. “That situation is about politics, it’s not about education. And frankly, that’s part of the problem.”

In June, Jindal tried to pull Louisiana out of the Common Core, but was unsuccessful as the state legislature, state board of education and the state’s superintendent of education are all supporters of the standards.

Common Core provides a set of standards for the skills and knowledge that each student from grades K-12 should possess by the end of the school year, with the methods for teaching these standards being left to state and local school districts.

This school year, Louisiana and 42 other states, as well as Washington, D.C., are all implementing the standards into their classroom.