Love Netflix? Get Paid To Watch It 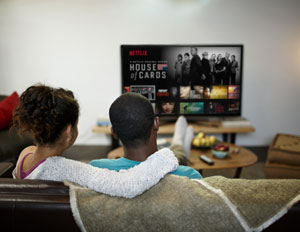 If you want to work from home, have experience with content management systems, and live in Ireland, you're set. (Image credit: Netflix)

If you’ve ever dreamed of getting paid while binge watching “House of Cards,” you might be able to make your dreams come true.

On Netflix’s job page, the company is offering a position on its content team.

Unfortunately, Americans are unable to apply. The position is for a “UK/Ireland Tagger,” and according to Netflix, “U.S. applicants need not apply.”

The position lets you work from home while you watch films and television shows, seemingly while eating pizza and popcorn during your shift. The position puts you in charge of tagging content with objective key words.

Content tagging is an important step in Netflix’s coveted algorithm, for which the company offered a one million dollar “Netflix Prize” to improve. In order to win the contest, teams had to improve the recommendation system by at least 10%.

You can apply here if interested. For those complaining that it discriminates against Americans, Netflix is looking for someone in the United Kingdom who is steeped in the culture.

According to the company, “Other responsibilities may also include acting as a UK/IE cultural consultant, highlighting UK/IE cultural specificities and taste preferences.”

What else are they looking for? A background in film and television, and some experience using Excel or any other content management system is preferred.