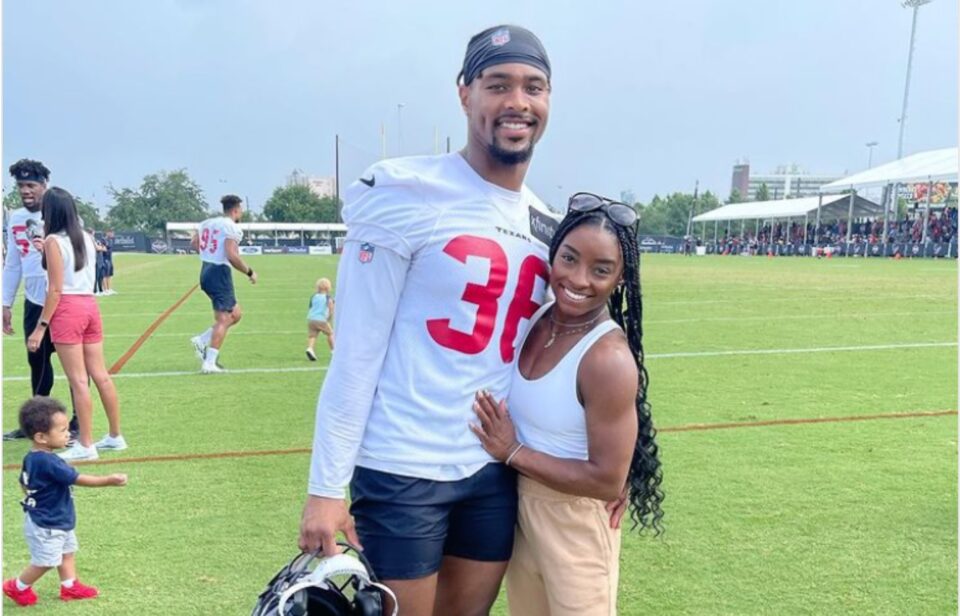 Simone Biles is home from competing in the Tokyo Olympics and one of the first people she wanted to see was her boyfriend, Jonathan Owens. Owens is a football player on the Texans football team and Biles dropped by his practice for a visit.

Biles was less than 24 hours home from Tokyo before she was in Houston at the Texan training camp to watch Owens in action. She landed at Houston’s Bush Intercontinental Airport at about four in the afternoon on Thursday and watched Owens train from the VIP section in the end zone on Friday morning, The Houston Chronicle reported.

Biles, who took home two medals this Olympics, has been dating Jonathan Owens publicly for about a year.

Owens has been a safety with the Texans since 2019. He has regularly moved from the practice squad to the active roster more than once.

Owens was a source of support for Biles when, midway through the Games, she came down with a case of “the twisties” that rendered her unable to compete. She pulled out of several of her events in the best interest of her safety. Although many in the social media stratosphere criticized her, Owens was the shoulder she could lean on.

“It was kind of tough,” Owens said. “It was actually the longest that we’ve been apart since we first started dating and everything.” When things got tough for Biles, Owens said he made sure to help her stay positive.

When Biles decided to proceed with the balance beam competition, Owens said he was proud of her ability to press forward.

“I was so proud of her,” he said. “She was able to overcome, mentally, what was going on. She kind of altered her beam routine, but I was just happy for her that she ended up going out and getting a medal.”

Biles, 24, and Owens, 26, appear to be very happy with each other and supporting each others’ career pursuits is a true sign of a strong relationship.

We’re sure this was one visit that they were both anticipating.