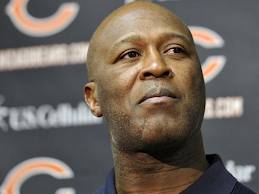 The Houston Texans did a very smart thing.

According to the Houston Chronicle’s John McClain, Smith was interviewed by the team this week, kicking off the first of several NFL jobs Smith was said to be in the running for.

Smith, 55, was fired by the Chicago Bears after reaching the Super Bowl in 2006, and leading his team to a 10-6 record in 2012. Team brass said it wanted to adapt to the league’s offense-first game. Smith is widely thought of as a defensive coach.

Smith said this year that his background never allowed him to think his firing was racially motivated. Sports Illustrated writer Drew Lawrence wrote a fantastic story on Smith, visiting him in his Illinois home.

“That was never a part of our makeup, that [race] was going to stop you,â€ he said of his family. “The only thing that’s gonna stop you is what you do on the field, who you are, all of that. That’s why I just can’t think that race is … that’s why it’s so important to keep going. You just can’t accept that as a reason, because in the end if you work hard and you do things the right way and you’re good at what you do, things are gonna work out for you. And that’s the only way I can see any of this. I just refuse to believe that people [are racially motivated].â€

Several factors make Houston a destination popular for Smith. The team has a talented core, a top draft pick next year, and Smith knows Texas; he is a native of Big Sandy.

Reports say up to three teams are expected to call Smith about their head coaching vacancies.