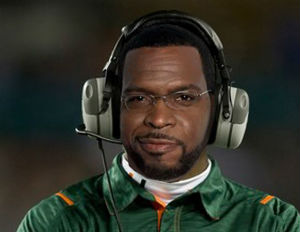 Luther Campbell – yes, Uncle Luke of the controversial hip-hop bass group 2Live Crew – has transitioned from his career as one of hip-hop’s pre-eminent provocateurs to become a football coach in Miami, Florida.

They know him as the coach who spends late-night hours analyzing game film, not the man who once made music and drank until sunrise. They know he will drill them, over and over, on their defensive assignments. He will blow that whistle. He will implore them to set the edge and mind their gaps. He will say in a postpractice talk: “Forget football, gentlemen. This is about life. You have to decide how bad you want it.â€

He will tell them not to swear.

One player, Joseph Robinson, a junior committed to Florida State, said: “My uncle and my mom used to play 2 Live Crew at home. They said he’s the reason there’s explicit music right now. I hope he’s a reason we win a state championship.â€

Campbell’s 2 Live Crew days were a watershed moment for free speech rights. Tipper Gore tried to have their album, “As Nasty As They Want To Be,â€ banned, and a store clerk was even arrested for selling it before an appeals court overturned the obscenity ruling. Their next album would be the first to appear with a parental advisory sticker.

Read the whole story at the New York Times.