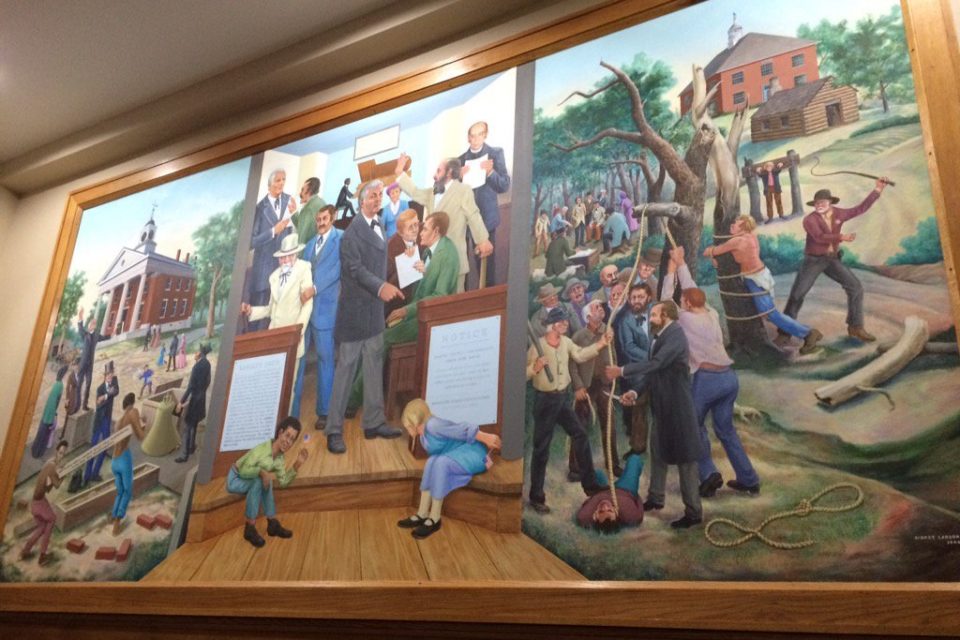 Officials in Columbia, Missouri, voted on Thursday to remove two controversial courthouse murals, one of which depicted a lynching.

According to the Kansas City Star, the mural, which depicts the history of Columbia, incorporates several racist scenes. In addition to the lynching, one shows a white man pointing a gun at a Native American man; three Black men, bound by chains as they carry a plank; and the moment in 1864 when a guerilla mob attacked Union loyalists.

Painted by muralist Sidney Larson, the controversial images have been in the Boone County courthouse for almost 30 years. But their removal was not a consideration until a group of attorneys wrote the county in July, voicing their concern that the scenes depicted on the side of the courthouse were an impediment to justice.

“Boone County can either be a justice leader or an embarrassing media soundbite,” said attorney Gary Oxenhandler, one of several residents who spoke out against the mural at the hearing. “I have never met a person of color who needed to be reminded their ancestors were lynched by mobs or beaten by police.”

Despite agreeing to take action, the commission didn’t go so far as to elect to have the murals painted over or otherwise destroyed. Instead, ABC 17 reports their order requires that the murals be “moved to a secure location, where the art can be cared for appropriately.” This will require a temperature-controlled location to prevent damage to the artwork.

“We’ve been in contact with various organizations here in Boone County to see if there might be space for them if there’s a willingness to take them,” said County Commissioner Janet Thompson.

Larson, who passed away in 2009, was a central figure to the Columbia arts community: the student gallery at Columbia College bears his name. According to Thompson, employees at the school have volunteered to assist with the removal process.