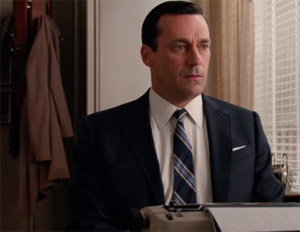 As many who read this blog may know, I’m a big fan of finding career themes and lessons in pop culture and TV. One show I love that is centered in an office and depicts real-life career themes is Mad Men, an AMC show which is now (sadly) in its last season.

Last night’s episode held many, with one of the main characters, Don Draper, facing quite a few professional lows but remaining resilient in the end. When Draper is made an outcast in the office, having been brought back after a forced hiatus (and to the utter dismay of one of the main partners at the ad firm where he works), he has to face harsh realities about working his way back up and repairing his reputation. (Draper was asked to take a leave of absence–with no return date given–after a history of erratic behavior and mishaps.)

Not only does Draper have to work under the woman he helped move up the ranks at the firm (but who still holds no seniority to him as a partner) but he has to perform menial tasks and entry-level work such as writing tag lines for a pitch.

Draper eventually came back to his senses, deciding to humble himself instead of imploding, and work his way back up the ranks into the good graces of his peers and fellow partners.

Just imagine having to work under someone you used to manage and losing your professional prestige among your peers? Quite a hard pill to swallow, right?

If you ever see a point in your career where you have to bite the same bullet, here are three ways to get through it:

1. Don’t take it personal–even if it is. Draper was forced to look at all he’d have to lose by taking things personally–and going on a drinking binge–in the aftermath of his return. Much of the office culture changed as well as perceptions of his legacy at the firm that he helped build. If you’re demoted, or find yourself being asked to do less as a result of a previous workplace snafu, take it in stride and focus on the fact that at least you were given a second chance.

2. Focus on results and doing better than before. This time around, it might be best to just follow the rules, tread lightly on making any waves, and earn back respect by building a consistent track record of results and improvement. For example, if you were reprimanded for always being late or making a major mistake, find ways to be early or to get more organized to avoid the same mistake happening again. Once you’ve earned back trust, then you can put in place a strategy to gain back your position in the company by continuing dialogue with key members of management and those who can vouch for your improvement.

3. Think of the choices you have and the bigger picture. Draper faced several choices in his reaction to being demoted and basically stripped of respect: Allow his situation to get the best of him on the job (with an audience of peers, some who already dislike him) and commit career suicide by rebelling; quit and start over again with no equity or partner status at another company; or play his current position in order to make a comeback (and hush the haters who believe he will inevitably go back to his old erratic high jinks that cost the company and made the office culture unbearable.) With a family to support, a point to prove, and a wife to win back, he chose the latter. Think about all choices you have in the aftermath of a major career mistake or demotion and the consequences of various actions you could take. Then think about all you stand to gain or lose with each.

In Draper’s case, do you think he should have just quit to start anew, or protected the career capital he’d already built–and his equity stake–by remaining at the company? #Soundoff and follow me on Twitter @JPHazelwood.