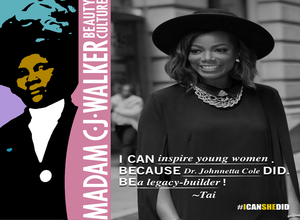 Earlier this week, Madam C.J. Walker Beauty Culture launched a new digital campaign called “I Can Because She Did.” The campaign is an empowerment platform inviting users to celebrate their individual accomplishments and the women who have inspired them via photo uploads, social sharing, and posts that complete the phrase “I can……Because……..did.”

“Madam C.J. Walker has been widely celebrated as a source of pride and inspiration in Black History for almost a century, but the truth is, she is an American icon and an inspiration for every woman,” said Richelieu Dennis, Founder and CEO of Sundial Brands. “Like so many women aspiring and working to create the life they desire, Madam Walker lived with a vision that was beyond her time; a vision for the way that things could be, not the way they were. She accomplished what no woman had done before, and with #ICanSheDid, we are inspiring women today to do the same, while recognizing and celebrating the many women who have come before and proven that the ‘impossible’ is indeed possible.”

Modern Day Madams Get in Formation

Plus many more. According to a statement released by the company, “These women represent the timeless ideals of Madam Walker’s audacity, ingenuity, empowerment.”

New films will be released over the next several weeks. You can show the world that you support #ICanSheDid by using your own photo to create an online meme and make a statement.