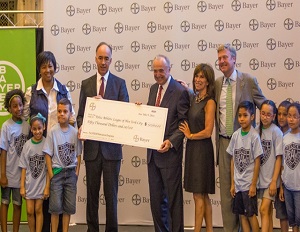 If no one else knows about the importance of STEM education and the opportunities that can develop from having these skills, Dr. Mae Jemison does.

The scientist, who made history in 1992 as the first African American female astronaut to go into space, was on hand in New York City on July 9 to present a $50,000 check from Bayer Corporation to the Police Athletic League of New York City (PAL) in support of its STEM education program.

After NYC Police Commissioner William J. Bratton, who serves as honorary president of PAL, was awarded the donation, Dr. Jemison conducted hands-on science experiments with PAL summer campers from Washington Heights and the Hunts Point section of the Bronx.

Serving as the spokesperson for Bayer’s national Making Science Make Sense (MSMS) program, Dr. Jemison has worked with the organization for nearly 20 years, helping to raise awareness about the importance of STEM education literacy.

“STEM is vital to improving the quality of life in this country and around the world,” Dr. Jemison says in a press release. “Bayer and I are committed to working together to increase the number of students achieving all aspects of STEM fields, especially on the critical issue of more women and minorities.”

Bayer’s donation was part of its three-day Science for a Better Life interactive experience in Grand Central Terminal’s Vanderbilt Hall, which included exhibitions that focused on Bayer’s innovations in healthcare, agriculture and high-tech polymer materials.