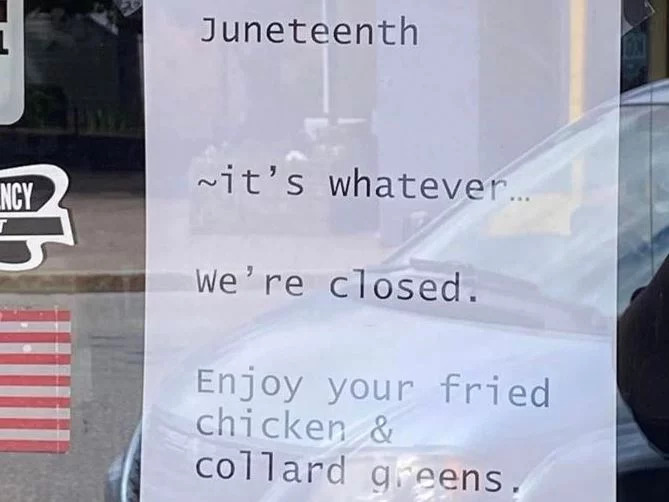 A racist Juneteenth sign posted to the window of a Maine insurance agency has caused an uproar both in the town of Millinocket and across social media.

The state of Maine celebrated Juneteenth as an official holiday for the first time on Monday, resulting in business closures for the day.

CBS News reports the Harry E Reed Insurance Agency in Millinocket was one of those businesses. A displayed closed sign taped to the establishment’s window read: “Juneteenth. It’s whatever… We’re closed. Enjoy your fried chicken and collard greens.”

Alura Stillwagon, a Millinocket resident, originally posted an image of the sign on Facebook on Monday with a caption reading, “The racism in Millinocket is real.”

Stillwagon’s mother, Lisa Groelly, who also lives in Millinocket, initially told her daughter about the sign and said she heard about the sign from a friend and immediately thought it was a joke.

“I’m hoping that people will wake up and realize that this is not OK. People need to know their history. They need to realize that there was a lot of suffering and that this holiday is warranted — and it’s needed,” said Groelly in an interview with NPR.

The sign prompted many negative reviews and low stars on the agency’s Google and Yelp pages. As a result, Yelp has “temporarily disabled the ability to post” while it investigates the content.

“While racism has no place on Yelp and we unequivocally reject racism or discrimination in any form, all reviews on Yelp must reflect an actual first-hand consumer experience,” the company said, per CBS News.

According to NPR, the online backlash also resulted in the termination of partnerships and relationships with the Harry E Reed Insurance Agency, including Allstate and Progressive. Social media users directly held these companies accountable if they were to continue associating with the agency.

Steve Golieb, chair of the Millinocket Town Council, released a statement on Tuesday addressing the incident:

“It is deeply saddening, disgraceful, and unacceptable for any person, business, or organization to attempt to make light of Juneteenth and what it represents for millions of slaves and their living descendants,” Golieb said in his statement. “There is no place in the Town of Millinocket for such a blatant disregard of human decency.”