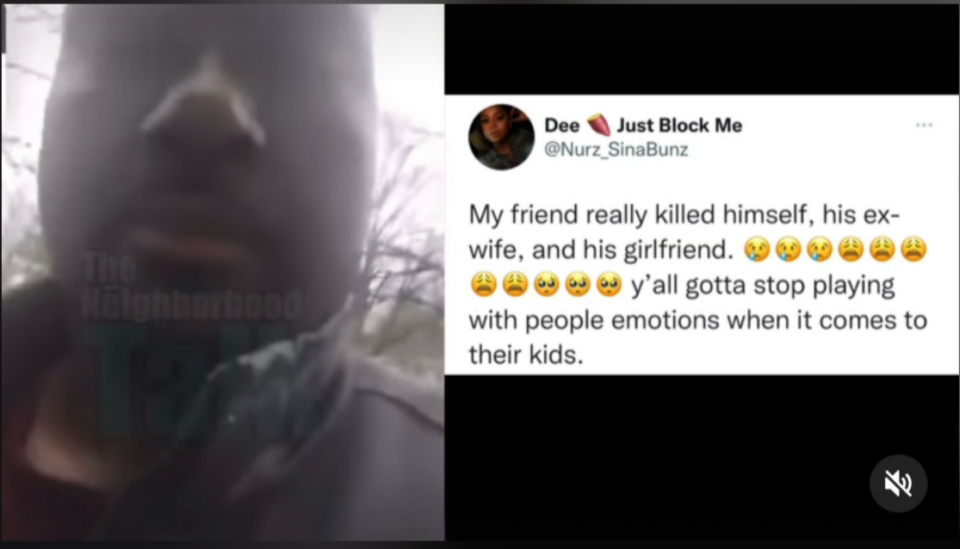 A man with apparent grievances about custody arrangements confessed to having killed his ex-girlfriend in a Facebook Live video, as he stood on his ex-wife’s doorstep waiting to kill her as well.

According to WBAL, Baltimore Police were called to the first crime scene around 1:30pm on Saturday after neighbors reported hearing gunshots. They found a rear door kicked in and the body of a 41-year-old woman inside.

At 2:07pm, Howard County Police also received reports of shots fired at an apartment building in Columbia, Md., approximately 30 minutes away from the first crime scene. When they arrived to investigate, they found a man and a woman dead in the building’s vestibule.

They identified the male suspect as 44-year-old Rajaee Shareef Black and believe that he shot his victim Natalie Black, 42, before shooting himself. The couple’s young children were found unharmed in the suspect’s car.

In the midst of their investigation, Baltimore PD was alerted of a video posted to social media in which the suspect confessed to his first crime and detailed issues surrounding custody of his children, the Baltimore Sun reports.

“Anyway, I just did something crazy, man. I just shot my ex-girlfriend in the head,” he says in the clip, later shared to Twitter by a friend. “Felt like a dream. I never thought I would be that guy. I can’t go to prison, so the person that really started my depression and all of this is my ex-wife. So, she next. Then I’m going to do myself too.”

As he finished his statement, a woman opens the door and Black says, “Oh, there’s my ex-wife right now,” before cutting off the live feed.

By authorities in Howard County were notified by their counterparts in Baltimore, it was too late.

“This is a tragic domestic event that did not have to happen,” said Baltimore Police Commissioner Michael Harrison, “and this is what we’re talking about all the time with guns and domestic violence and the willingness of people to use these guns to take out their anger to solve conflict.”

The name of the first victim has not been released.