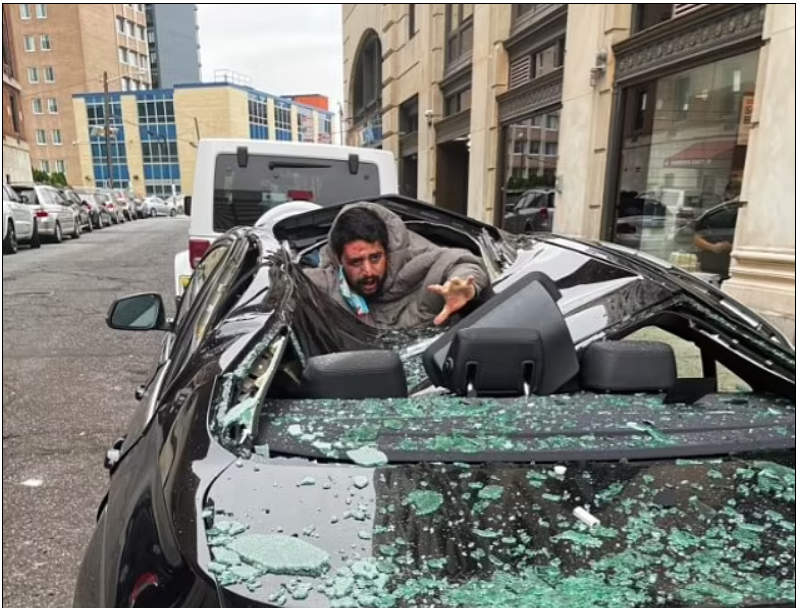 A man averted a major tragedy after allegedly jumping out of a hi-rise building window and plunging nine stories in Jersey City, New Jersey.

According to The New York Post, a man jumped from the building, landed on a BMW, and miraculously survived. However, he suffered several injuries, and his right arm was dangling from the side of his body. The aftermath of the incident, which took place on Wednesday, was caught on a cell phone video.

The survivor, who did not give police his name or address, was a 31-year-old man. After he crashed onto the roof of the black BMW 330i, a witness captured the scene.

“I heard a big boom and I didn’t think it was a person at first. The back window of the car just busted out — exploded. Then the guy jumped up and started screaming. His arm was all twisted. I was like, ‘Oh my God!’ I was shocked. It was like being in a movie,” said Smith, who said that she works in sales and had been on her way to a nearby McDonald’s. “He was like, ‘What happened?’ And was like, You fell. I was thinking, thank God, it probably helped that he had a fluffy jacket on.”

She stated she called 911 as she also took photos and recorded the scene seconds after he fell. The unidentified man, who jumped from the ninth floor of the building, was rushed to the hospital in an ambulance and was listed in critical condition as of Thursday, according to Jersey City spokeswoman Kimberly Wallace-Scalcione.

Another onlooker, Mark Bordeaux, who works in the building the man jumped from, saw the aftermath of the jump. He stated that after the fall, the man kept telling people to “Leave me alone, I want to die.”

After the incident, Jersey City police officers briefly shut down the surrounding roads near the high-rise, including the Journal Square PATH Station and Hudson County Community College.