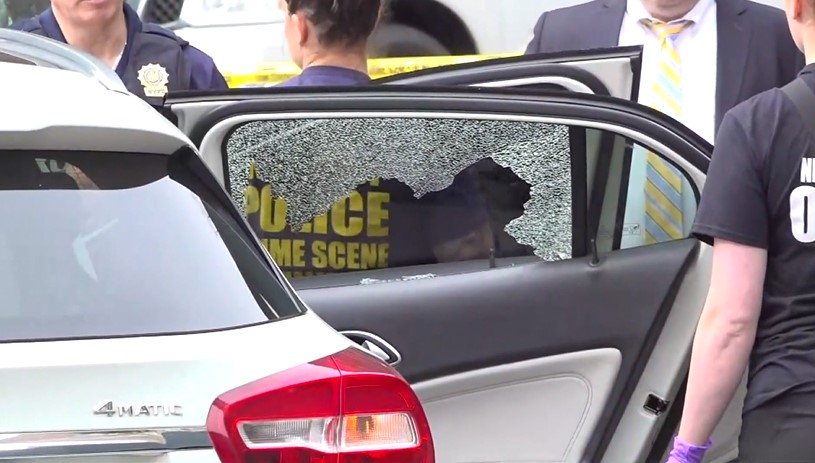 A man visiting New York City from Virginia was reportedly brawling with his girlfriend in the street before he was fatally shot in the head on Sunday afternoon.

Ronald Thomas, 27, was killed sitting in a white Mercedes-Benz GLA 250 around 12:15 p.m.Sunday, The New York Post reported. Eyewitnesses told police that Thomas was fighting with his girlfriend and “threw her to the ground” right before he died.

Thomas had just gotten back inside his car after assaulting his girlfriend when another vehicle pulled up and fired a gun near the Frederick Douglass Houses on West 102nd Street and Amsterdam Avenue. The deadly shooting took place about a block from the New York Police Department’s 24th Precinct station house.

The woman he was with told police that she had just walked behind the vehicle when she heard multiple gunshots. Authorities believe it was a targeted attack against the Bronx native who returned to the city to visit family.

“They all knew each other,” one police source said.

Thomas was pronounced dead in his car at the scene, Patch reported. The shooter fled the scene. No arrests have been made in connection with the murder.

The victim’s family was distraught over the news. Thomas’ brother is now in critical condition after going into cardiac arrest upon hearing of his brother’s death, the New York Daily News reported.

The latest bout of gun violence in NYC comes amid an announcement that the NYPD would be placing more officers on the street at night to combat an expected uptick in shootings during the summer.

Council Members Gale Brewer and Shaun Abreu spoke out against the “senseless” gun violence plaguing the city and nationwide.

“The impact of gun violence reverberates through the community, creating trauma, hurt, and unease.” Brewer tweeted. “Turning to a gun to resolve a dispute is never acceptable.”

“Any life cut short by gun violence is one too many,” Abreu said.