Marijuana Based Sandwiches by Cheba Hut Expanding to East Coast 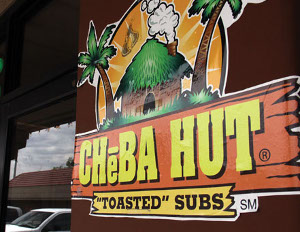 Skunk, Dank and the Chronic are all street names for different strains of marijuana. They’re also the names of marijuana themed sandwiches available from the Arizona-based restaurant chain, Cheba Hut, who found success with their menu tailored to stoners.

Cheba Hut, whose name is derived from “Cheeba,â€ a slang term for weed, has been so successful that they’re in talks with a developer about expanding to New York, Massachusetts, Pennsylvania and Vermont.

Cheba Hut’s founder, Scott Jennings, discovered the college correlation when he was a delivery driver at Arizona State University and noticed that most of his late-night customers seemed to be “inhaling.â€ Jennings, who’s now the company’s CEO, decided to cater to this untapped market by opening a sub shop that delivered food to the campus.

The restaurant’s menu keeps with the restaurants theme and uses terms familiar to drug users. The subs are “toastedâ€ and come in three sizes: “Nugs, Pinners, and Blunts.” Their stores are decorated with Bob Marley posters, pro-marijuana legalization literature and stoner stickers depicting bongs and marijuana leaves. Some customers may be surprised to learn that none of the restaurant’s sandwiches contain actual cannabis.

Since opening their first store in Tempe, Ariz., in 1998, Cheba Hut now sells its “toasted” subs from fifteen locations in seven states, according to its website. Last year, the restaurant made about $10 million in sales, according to The Boston Herald. And from 2009 to 2010, the franchise’s overall revenue leapt by nearly 30 percent, according to food-industry magazine QSR.