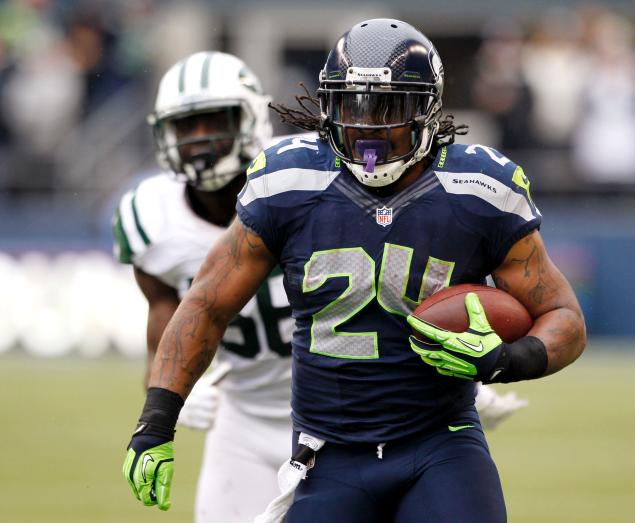 Marshawn Lynch tells the NFL Network's Deion Sanders that he's a man of few words -- and he's ready to go.

Everyone is talking about Marshawn Lynch. And Mr. Lynch isn’t talking back.

Well, to Deion Sanders he is. And it was smart of the NFL Network, amid all the hustle and not-so-subtle ridiculousness of Media Day.

“Lynch spoke for just six minutes and 28 seconds of the Seahawks’ one-hour session on Tuesday,” Daily News columnist Gary Myers wrote Tuesday. “The remainder of the time at the Prudential Center he stood in his interview area against a pole or a wall wearing sunglasses – it really wasn’t that bright indoors – with the hood of his warmup suit pulled tight over a baseball cap. He did break the monotony by chatting for a little bit with Deion Sanders.”

“By acting this way, Lynch drew more attention to himself than by anything he could have said in an hour. The few answers he did give were pretty mundane. The league won’t fine him because he showed up with his teammates, although there had been some doubt whether he would grace the event with his presence.”

Sanders got more out of him than he probably expected. Check out the video below.