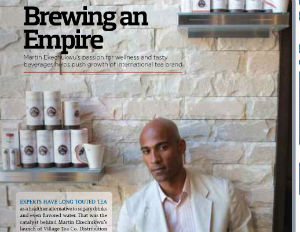 Once Ekechukwu cleared that hurdle, he was able to develop and hone his product. He pored over research and analysis that highlighted the health benefits of tea, and worked with a laboratory that helped him determine if he’d be able to replicate those benefits with his ingredients. “There are a bunch of studies about the healing properties of tea and the healing properties of tea ingredients,â€ he says. “So I used those as the foundation of developing the product line in making sure we’re hitting those health and benefit points.â€

Promoting Village Tea at trade shows is what helped get the product into national retail stores. “We lived and breathed by trade shows,â€ he says. “Our first account was Whole Foods. We picked up the Rocky Mountain region [about 30 stores in total]. That was on the first day of the trade show,â€ back in 2009, he says. Over the next year, Vitamin World and The Vitamin Shoppe also picked up Village Tea. And today, Ekechukwu’s loose-leaf tea blends are in nearly 1,000 stores nationwide. “Trade shows are an amazing tool to help push the brand. We try to do one tea expo a year whenever we can.â€

Those trade shows even helped Village Tea go international. The company now has its product in more than 30 stores abroad. This was made possible by a Latin American distributor who approached Ekechukwu about selling to grocery stores in Costa Rica. However, it took about a year from the time the foreign distributor reached out to Ekechukwu before Village Tea could legally export its products.

The challenge is that every country has different rules and regulations on imports, says Ekechukwu. “You have to get the ingredients translated into that local country’s language. And that has to be sent to the embassy of that respective country,â€ he explains. “After that, there’s still lots of red tape to maneuver to do business abroad. It’s not an easy route. It took us about three months for paperwork, and four months just to get regulators in Costa Rica and Guatemala to look at the product line. Then it took another four to five months for them to come back and approve everything.â€ Today, exports make up about 12% of Village Tea’s business.

The company has an end game, which is to position itself to get brought by larger company.Â  Ekechukwu says this will help Village Tea grow bigger and faster than what he would be able to do on his own. This past summer, DC Brands International (OTC:HRDN), which produces a number of energy drink lines, acquired a minority interest in Village Tea.

The move helps to increase sales of Village Tea’s our product line through existing channels of distribution while expanding the footprint of the brand into new accounts, says . It also allows Village Tea to leverage DC Brands resources to explore brand extension opportunities into new categories such as branded bottled beverages and co-branded tea infused nutritional beverages.