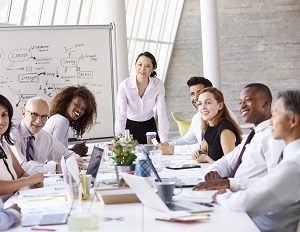 We have never been so connected. With modern technology, countries all over the world are, quite literally, at our fingertips. Why, then, does it seem so hard to spread the word about something as simple as, say, the company picnic on Saturday, the new HR policy changes or that big new client the sales team has been courting for months?

Good office communication flow boils down to what I call, the “four Psâ€ – portions, packaging, placement and point-in-time. In other words, you’ve got to pass the message at the right time, in the right place, and in nicely packaged, digestible bites.

A year ago, my mobile app and web development studio, STRV, had fewer than 50 employees all working out of the same office, and our weekly company-wide meeting was the most effective way to distribute news. Today, we are a team of nearly 150, working out of five offices, in two countries, and in three different time zones.

Just as the media industry has had to move to a 24-hour news cycle to keep up with the public’s growing demand for knowledge, I’ve found myself faced with a similar situation: My employees don’t want to wait for a company-wide meeting to get the latest updates on the projects we’ve landed or the new startups we’re working with. They want the information immediately –Â in nicely packaged, digestible bites. I don’t blame them.

Here’s what each of the four P’s can look like in your own business.

You can’t dump a ton of information on people at once. Period. Odds are they’re not going to read it all, let alone digest what they’ve read. So, first things first: Figure out what your employees want to know. Then, dole out that information in bite-sized chunks. It goes without saying that people will be more inclined to at least skim a memo, email or flyer if the subject matter interests them.

One area that most interests my employees, for example, is the projects we’re working on. We have a database with all this information, which is accessible to everyone at the company, but, really, who’s going to take the time to look through that? Instead, we pick two projects each week to feature around the office with relevant, bullet-pointed information on each. The technique has proven very effective at keeping employees informed, but not overwhelmed.

Information needs to be easily digested. Your employees are busy people, so forget about long paragraphs. Instead, make your message structured, short and to-the-point. Big pictures are attention-grabbers, as are colorful, eye-catching fonts and big headlines. In fact, visual elements can often drive home a message better than a bunch of text. It’s as simple as that.

Put some serious thought into where you will place company information. Bulletin boards may seem like a good choice, but they’re often in overlooked locations. Emails, on the other hand, can easily be ignored. As I mentioned earlier, company-wide meetings are good platforms for big announcements, but may have a tendency to run long and be overwrought with needless information that employeesÂ generally tune out.

If you want your team to actually absorb the information you’re giving them, then feature news in places where it might actually get read. We tape company announcements, including project information, around the kitchen, giving employees a chance to multitask while waiting for their morning cup of coffee. Another prominent reading location: the bathroom stalls (no joke – I took a survey). We will soon also be equipping our offices with multiple closed-circuit TV monitors that will continuously broadcast text-based company alerts about upcoming events.

Timing, as they say, is everything. And the best time of day to deliver important messages to your team is in the morning, when they’re feeling fresh and ready to start the work day. From my experience, time and place are very interconnected when it comes to effective information distribution. Big announcements made at the end of a work day are likely to go in one ear and out the other. But if every person is individually greeted as they walk into the office each morning with the most important information of the day, many business executives agree that retention automatically goes up. At STRV, we’re working on a system that will immediately ping each employee as they arrive at their desks with announcements about meetings, events and other useful information.

I strongly believe that it’s a CEO’s responsibility to adapt to the ways their team works. It should not be the other way around. Find out how your employees best process information, and make sure they get whatever they need to do their jobs effectively.

This article was written byÂ DAVID SEMERADÂ and originally appeared on BusinessCollective.com.

Â David Semerad is a driven entrepreneur with experience in software development. He grew his mobile/digital app development companyÂ STRV.

David Semerad is a driven entrepreneur with experience in software development. He grew his mobile/digital app development companyÂ STRV.