Maya Angelou's Poetry to be Turned into Hip-Hop Album 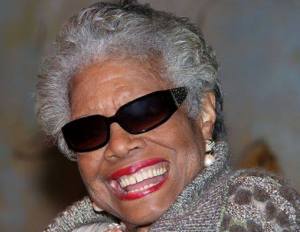 Maya Angelou is surely one literary genius whose work will live on for generations, and her latest project is further proof of her lasting impact.

Thanks to Shawn Rivera, the lead singer of R&B group Az Yet; and RoccStarr, who co-wrote Chris Brown’s Fine China, the work of the late, great poet will be turned into a 13-song set that will combine Angelou’s words and lyrics with a hip-hop beat. The album will be called Caged Bird Songs.

The title is taken from Angelou’s 1969 memoir, I Know Why the Caged Bird Sings. Her grandson reports that the album is one of the last projects Angelou completed before her death.

“Grandma loved it from the beginning,” Huffington Post reports Colin A. Johnson saying in regard to the album’s concept. “These guys were inspired by Grandma’s work, which many people are, and felt like giving it a different medium of delivery to make it more obtainable to a larger group of people.”

The album doesn’t represent the first time that Angelou’s words have been used in the music world. She previously released a calypso album and collaborated with Ashford & Simpson forÂ Been Found in 1966. SheÂ wasÂ also featured on Common’s 2011 album The Dreamer/The Believer.

“She saw [hip-hop] as this generation’s way of speaking and conveying a message,” said Johnson, adding that Angelou had “great stories about interactions with Tupac [Shakur].”

Johnson is in charge of Angelou’s estate along with his father, Guy B. Johnson. The two men have founded Caged Bird Legacy to help launch future Angelou projects.

“You’ll see a lot of other things come out with her name,” said Johnson. “And these are all projects that she had out there in the works at various levels of completion.”

Angelou’s hip-hop album is set to be released through Smooch Music on Nov. 4.