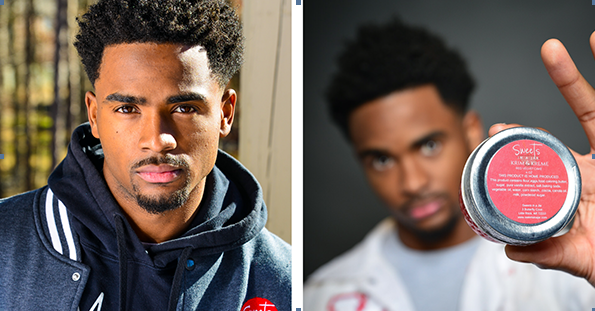 For Kolby McNeal, sweets were a big part of his upbringing, along with football. After graduating from the University of Arkansas Pine Bluff, the HBCU entrepreneur decided to create his own venture dedicated to the tasty desserts he loved so much.

Sweets in a Jar L.L.C. launched in Little Rock, Arkansas, as an on-the-go homemade dessert company. Known as “Cakes” among his peers, the student-athlete entered the university on a full football scholarship and worked hard to grow his creative passion into a thriving business. From a child, McNeal enjoyed creating sweets—from Vanilla Bean Crème Brûlée to experimental cakes based on his favorite treats—in between football camps and school. His first business was a sandwich-making business in middle school to raise money to buy a moped.

McNeal’s HBCU experience is deeply intertwined with his baked goods, and their names often pay homage to different cultural traditions. His first significant sale came after he started selling “Krim & Kreme,” his version of the red velvet cake as a nod to his fraternity, Kappa Alpha Psi, and the ladies of Delta Sigma Theta Inc.

“My college experience has been amazing. It’s nothing like having the type of support that pushes you to pursue your dreams and gives you the foundation that you need to get there,” says McNeal. “When my coaches and teammates found out that I loved baking, they were my best customers.”

Another popular pick is “I Got the Keys” Key Lime Pie based on a television appearance he made in middle school baking his version of a key lime pie.

He also uses his desserts for good causes. When McNeal found out his older brother was diagnosed with epilepsy a few years back, he created his “Honeybun Kane” cake, based on his brother’s favorite snack growing up, with all the proceeds going to help those suffering from the illness.

“It has indeed been incredible to see the amount of support that I have received. My fraternity brothers, my teammates, my coaches, really my whole school. I guess they don’t call us ‘The Pride’ for nothing,” says McNeal. “I particularly enjoy when older women support me that are around my grandmother’s age and tell me that I give them a run for their money.”