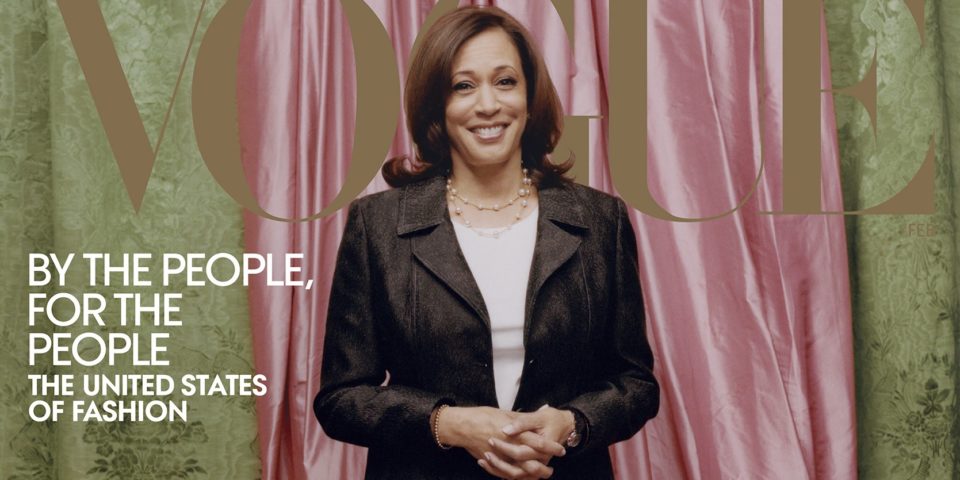 Vice President-elect Kamala Harris’ Vogue cover has caused some controversy, with some people less-than- impressed with the photo, but it has also prompted a new trend on Twitter.

A preview of Kamala Harris’ photoshoot began circulating on social media this past weekend. One photo released shows Harris standing in front of a pink and green backdrop, paying homage to her sorority, Alpha Kappa Alpha. In the photo, Harris stands with her arms crossed, wearing a dark jacket by Donald Deal, skinny pants, her go-to Converse shoes, and her trademark pearls.

Making history was the first step. Now Harris has an even more monumental task: to help heal a fractured America—and lead it out of crisis. Read the full profile: https://t.co/W5BQPTH7AU pic.twitter.com/OCFvVqTlOk

Tyler Mitchell, a young Black photographer, was hired to capture the Vice-President-elect’s cover along with a team of Black staff. In fact, the Vice President-elect’s glam team, the sittings editor, and the writer for the historic feature are all Black women.

This is not Mitchell’s first time working with Vogue. He was also the photographer responsible for Beyonce’s Vogue cover in 2019.

While it didn’t take long for people to criticize the image, believing it was not up to par with previous Vogue covers, the photo has also caused Chuck Taylors to begin trending on Twitter.

According to the the New York Times, Harris and her team did not get a chance to see the final photo for the cover. Her team has declined to comment on what happened. Meantime, Vogue released a statement:

“The team at Vogue loved the images Tyler Mitchell shot and felt the more informal image captured Vice President-elect Harris’s authentic, approachable nature — which we feel is one of the hallmarks of the Biden/Harris administration.”

Vogue is known for having a complicated history when covering women of color. Several reports have come out about the magazine’s editor, Anna Wintour, and her own past with staffers of color and the lack of Black representation the magazine has overall.