Meet the First Black Commissioner of the Big Ten Conference 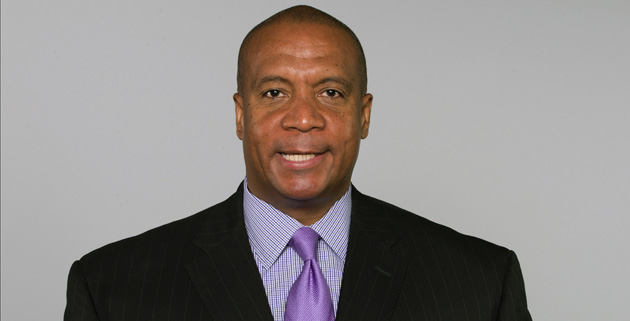 When it comes to the business of sports, Kevin Warren is a trailblazer. Warren was just named commissioner of the Big Ten Conference—the oldest Division I college sports conference in the nation. He is the sixth commissioner to hold the position and the first African American.

He leaves his current role as the Vikings’ chief operating officer—the highest executive position held by an African American in the NFL according to a bio on the Vikings’ website.

The Big Ten is the oldest D1 powerhouse and one of, if not the wealthiest conferences in the NCAA. Sports insiders speculate that in his new role, Warren may focus on increasing revenue sharing between the 14 schools that make up D1 and may focus on further diversifying Big Ten executive makeup (as Vikings’ COO, four women moved into executive roles with the team).

The new commissioner also helped the Vikings develop U.S. Bank Stadium for $1.1 billion which opened in 2016.

“Kevin has impacted the Vikings and our family in immeasurable ways over the last 15 years. He has worked tirelessly to elevate the Vikings franchise, all with the greater good of the organization and Minneapolis-St. Paul in mind. From the very onset, Kevin helped us navigate and execute the purchase of the franchise. He then evolved as a leader of the organization in ways we never could have imagined, leading our vision for U.S. Bank Stadium and TCO Performance Center, developing a world-class fan experience, and implementing many initiatives that have transformed our franchise with the benefit of our employees and Vikings fans top of mind. Kevin has been a tremendous leader for the Vikings, and he and his family have been passionately and intricately involved in the community, enhancing the lives of so many people. We know the Big Ten and their student-athletes, coaches, and administrators are extremely fortunate to have his leadership, character, and vision and we wish Kevin and the Warren family all the best. We will work with Kevin and the Vikings management team over the next three months to help us through this transition and process how we want to move forward.”

And Warren offered his thoughts on his new position in a released statement:

I am absolutely honored to become the sixth commissioner of the Big Ten, a conference with such rich history, tradition, and respect,” said Warren. “The opportunity is an incredible and unique blend of my lifelong passion, commitment and experience. Positively impacting the lives of young adults has always been part of the fabric of my family, and I will work tirelessly with our member schools to ensure that we are providing every possible best-in-class resource to enhance our students’ educational and athletic experience, as well as empower them for success upon graduation. Jim Delany, our presidents, chancellors, athletic administrators and coaches have created an extremely strong culture and foundation from which to build. I am very grateful to work alongside Jim as I transition into my role and work to hold true the respected values of the Big Ten, as we propel our conference into the future.