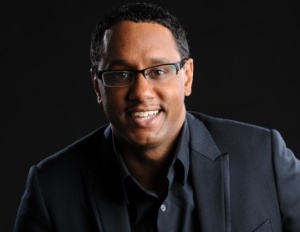 The Process: As a tech expert known for his insights via Web, radio, television and speaking engagements, one of the first things Armstrong does in the morning is check his RSS feeds for news. He does his social media check-ins for everything except Facebook. (He says he finds less business value there in the morning hours.) But before he does any of that, he looks at a motivational phrase he came up with that he has on his bathroom mirror: “Each day, take one step toward the right path to your ultimate goal.â€ Armstrong says that centers him and prepares him for the “craziness” of his day.

The Vision: Like many of today’s entrepreneurs, Armstrong found himself being an intrapreneur while holding staff positions at other people’s companies. “You have to protect and nurture your brand as you are simultaneously maintaining the company’s brand,â€ Armstrong says. When he was working for a company, he got the idea to cultivate his own brand of speaking about technology, so he convinced his wife of almost 15 years to quit her job and help build the brand.Â  As CEO of the new company, his wife, Nicole Hunter, got everything in order on the back end, and just in time too. He was soon laid off from his job just a few months later. Since then, the two of them have grown the company into a full-time entity and are currently pitching television show ideas.

The It Factor: Armstrong says his brand is different from all those other tech sites, speakers and firms because his approach is to talk about technology to the laymen, not the early adopters and those already entrenched in the industry. “I’m going way beyond serious talking about a new phone. I dig more into how this will help you get better with your diabetes. I’m looking at real-world problems through the lens of technology.â€

The Defining Moment: “When I was 21, I worked for a cable company,â€ Armstrong says. “My boss was ready to fire me because she said I was spending more time trying to sell the music video channel I had developed than the company’s product, but her boss, the general manager, liked me and kept me on. That was a light-bulb moment for me because I got to see how some people react to initiative, and I knew it could potential be a special, powerful thing.â€

The Life: Unlike a lot of other techies, Armstrong does not turn off his phone or computer at a certain time.Â  “My creativity spikes at different moments. Setting a time to turn off everything just doesn’t work for me,â€ Armstrong says. But he does have some rules: There are no computers and no texting or tweeting allowed in bedrooms. (That goes for the bedroom he shares with his wife, as well as his 9-year-old’s bedroom.) He is also a stickler for his every Thursday date night with his wife and his gadget-free lunch from 12:30 to 1:30 everyday.

Register now at blackenterprise.com/sbu to see weekly video courses from Armstrong and other industry experts on how to build, grow and nurture your business. On top of that, you’ll have a chance to win more than $50,000 in prizes, including one-on-one consultations with successful entrepreneurs like Emerson, a small business makeover for your biz courtesy of Dell, and much more!