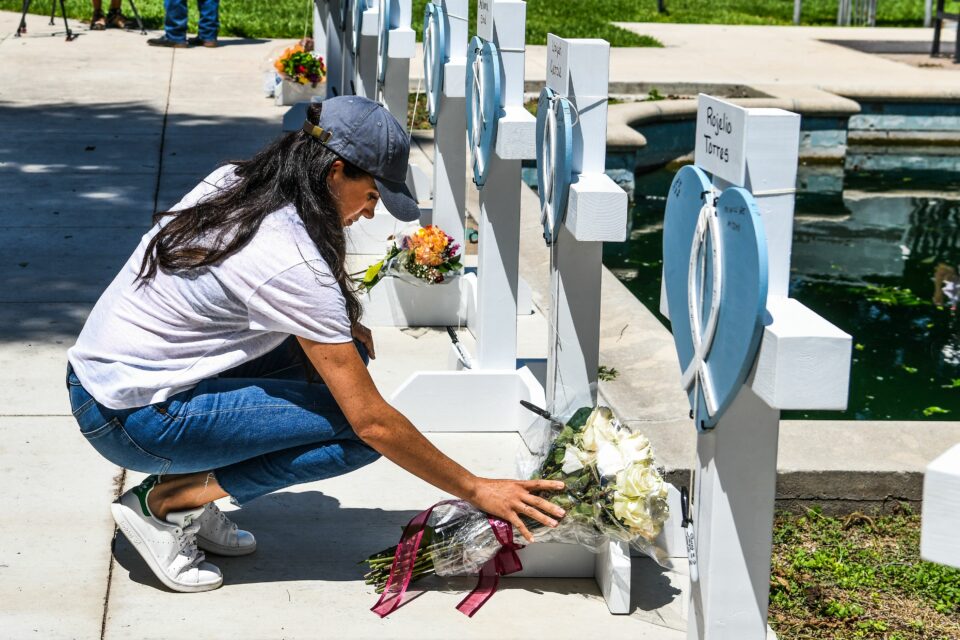 TOPSHOT - Meghan Markle, the wife of Britain's Prince Harry, places flowers as she mourns at a makeshift memorial outside Uvalde County Courthouse in Uvalde, Texas, on May 26, 2022. - Grief at the massacre of 19 children at the elementary school in Texas spilled into confrontation on May 25, as angry questions mounted over gun control -- and whether this latest tragedy could have been prevented. The tight-knit Latino community of Uvalde on May 24 became the site of the worst school shooting in a decade, committed by a disturbed 18-year-old armed with a legally bought assault rifle. (Photo by CHANDAN KHANNA / AFP) (Photo by CHANDAN KHANNA/AFP via Getty Images)

Meghan Markle, the Duchess of Sussex, visited the memorial site for the victims killed in a Texas elementary school shooting massacre.

On Thursday, Chron News reported that the Los Angeles-born philanthropist was photographed laying a bouquet at a makeshift memorial outside the Uvalde County Courthouse. This week, families and community members gathered to honor the 19 students and two teachers who lost their lives at Robb Elementary School.

In the photograph, Markle bowed her head, honoring the cross bearing the name of one of the students killed in a single classroom at Robb Elementary School by suspected shooter Salvador Ramos. She reportedly continued to walk around the site to pay her respects.

Markle and her husband, Prince Harry, left the royal life to start a new one in California. They have two children. According to her spokesperson, the mother decided to take a personal trip to Texas to show support to a “community experiencing unimaginable grief,” as per the Associated Press.

Newsweek reported that the 40-year-old Duchess also donated blood and food. But her appearance has caused mixed feelings across social media, some calling it a PR stunt.

“Sorry, this was a tragic event & she has used it as a photo opportunity. #MeganMarkle she be visiting her seriously incapacitated father instead. Always seeking self-publicity,” wrote an angry Twitter user.

“This appears motivated by self serving attention seeking for #MeghanMarkle, her “humanitarian “gesture is devoid of empathy and sincerity,” another user wrote.

Are you still doubting that #MeghanMarkle went on a self serving PR trip? pic.twitter.com/9paB8i9dnZ

Others came to her defense, calling her kind and caring.

Thinking how very kind & caring it was of Megan Markle to go & show love & support & donate blood & crates of food & beverages for this grieving Texas community, & do so in a low profile manner to not create any attention for her! This was a act of pure kindness by her! 🌻

“I’m so disgusted at the fact that people are so comfortable bullying Meghan Markle for simply donating to survivors of the school shooting and families of the victims. How is giving back to the community an offense to you? Why do people insist on being so evil?” another Twitter user wrote, per Newsweek.

According to the news outlet, Markle spoke to the volunteers at the blood drive, and no one knew it was her until she left. She had conversations with them as if she was a neighbor.

“We were just talking about, you know, the situation and what happened what we were doing here. I told her about us giving out water to the people and feeding them,” said volunteer Gloria Contreras, per Buzzfeed News.