Meyerhoff Scholar Nominated to be the Next U.S. Surgeon General 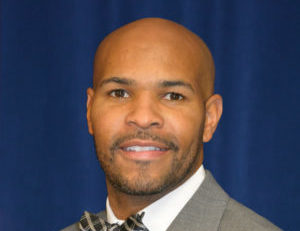 Courtesy of the Indiana Department of Health

Indiana State Health Commissioner Dr. Jerome Adams has been nominated to be the next Surgeon General of the United States by the Trump administration.

According to his bio on the state’s website, Adams’s extensive background includes roles as an assistant professor of clinical anesthesia at Indiana University School of Medicine and as a staff anesthesiologist at Eskenazi Health, where he is chair of the Pharmacy and Therapeutics Committee.

A Maryland native, Adams is a graduate of the prestigious Meyerhoff Scholars Program at the University of Maryland Baltimore County, where Freeman Hrabowski is president.

Meyerhoff Scholars were originally all African American and male; the program now includes women and students of all racial “backgrounds who are committed to increasing the representation of minorities in science and engineering,” according to a historical timeline of the program.

As governor of Indiana, Mike Pence, who is now vice president of the United States, appointed Adams to be health commissioner in 2014. Adams has reportedly met with members of the Trump administration to discuss health, healthcare, and community health.

If confirmed, Adams will be the second African American man to serve as U.S. Surgeon General (the first was Dr. David Satcher; the first black person was Dr. Jocelyn Elders).

The Doctor Is In

Adams, who has a master’s degree in public health, has been widely credited with helping to contain an explosive HIV epidemic in a rural Indiana county by advocating the use of a clean needle exchange.

“Health workers credit Adams with persuading Pence to allow Indiana counties to create syringe exchanges to contain the spread of the disease. ‘We wouldn’t have syringe exchange if it wasn’t for him,’ says Carrie Lawrence, a public health researcher at Indiana University who helps implement syringe exchange programs throughout the state,” NPR reports in a post on Adams.

Although it seems counterintuitive, clean needle exchanges have been shown to halt the spread of HIV, rather than increase drug abuse. Pence was reluctant to allow the exchange; Adams told the New York Times that he shared the governor’s concerns.

But Adams quickly grasped that the county was in crisis, and understood that extraordinary measures were called for.

His ability to assess the situation quickly and to make a decision based on evidence recommends him as an outstanding health leader for our nation. Adams gets my vote.