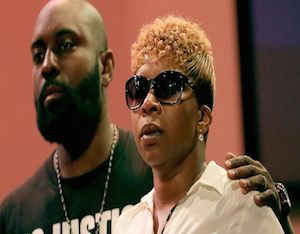 Still dealing with the death of their child, Brown’s parents Lesley McSpadden and Michael Brown, Sr., plan to travel to Geneva, Switzerland to discuss their son’s case with members of the United Nations Committee Against Torture. Alongside Brown’s parents will be human rights attorneys and Ferguson activists.

The goal of all parties is to present a formal brief to the U.N. convention about the tragic event in Ferguson, Missouri. Justin Hansford, a Saint Louis University Law professor, co-wrote the brief and in it expresses hope for a “global movement against excessive force by law enforcement and international recognition that police violated human rights in their interactions with protesters.”

Hansford said, “We cross our fingers that it’ll be something that will influence decision-makers to take a more peaceful, more preventative approach as opposed to a more militarized approach to responding to peaceful protests.” The issue in Ferguson is a hot button topic as the grand jury is soon to announce whether or not they will indict Officer Darren Wilson in the shooting death of Michael Brown.

Anthony Gray, who serves as the Brown family attorney, confirmed that Lesley McSpadden and Michael Brown, Sr. are going to Geneva. Check out full details of the trip and more on the push get the case to the U.N. by clicking here.

FacebookTwitterYoutube
← Entrepreneurs Conference: 5 Tips to Hiring the Right Talent ← 5 Questions to Ask Before You Rent a Coworking Space
×