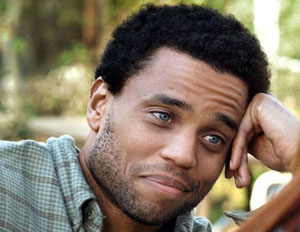 Don’t expect Michael Ealy to run away from a challenge. Engaging in believable love scenes that ladies dream about and the fellas respect (Think Like A Man)? Well, he managed to preserve his sexy. Pulling off a heist (Takers) and stealing a rapper’s girl? Playing a ruthless thief never looked so cool. Infiltrating terrorist groups (“Sleeper Cell”) while restoring peace? Those criminals never saw him coming. And when it came to immortalizing the life of a community activist and educator in his latest project, Unconditional? It was a humbling, noble walk in those shoes. And a connection that the Baltimore native and University of Maryland grad was honored to make.

Ealy caught up with Blackenterprise.com to talk about why this film caused him to lose his fight, how he almost didn’t become an actor and how he deals with gossip.

Blackenterprise.com: In Unconditional, an inspiring story about redemption and the power of love, you portray Joe Bradford. What was the allure of this role?

Michael Ealy: Everything especially because these days it’s all about redemption, second chances and how you can influence your community by doing the little things. A lot of people want to throw money and donate to causes and charities but giving your time and being a father figure to someone the way Joe [“Papa Joe”] Bradford was to those children is the most admirable and noble gesture.

So were there any reservations in capturing a real-life figure?

Not at all. If anything, I was honored that [the role] came my way. Then once I met Joe [Bradford] the deal was sealed. For me, watching his work with the kids in his neighborhood, I thought, this is so important I have to do it. When I did “Their Eyes Were Watching God,” based on a novel by a wonderful writer who inspired me at a very impressionable young age, I never thought I’d get an opportunity to play that role. I felt similar when I received the opportunity to play someone like Joe. Again, that’s when I knew I had to add this role to my body of work.

The story of Joe Bradford is such a moving testimonial. Was there one scene that rocked you to the core?

Yes, the scene where the young actor asks: “Will you be my father?” When I read the script I cried. When we did the scene I wasn’t acting. There’s nothing sadder or more devastating to me than a young boy or girl having to ask for guidance or for parenthood. That was a transformative moment for me. I was thinking, man, I’m gonna fight it and not cry, but I couldn’t.

And you deliver a darn good cry— and with no onions! This Christian-based movie encourages social change and community outreach. Are you involved in any grass roots efforts?

I have been involved with the videos shot to send to churches around the country, and taking advantage of grass roots [marketing]. Papa Joe says his goal was to inspire more Papa Joe’s because he can’t be in every city; so he’s hoping that this film inspires more people in other cities to get involved and mentor children like he has.

Many might be unaware of your background as a scholar and activist. Were your parents and professors disappointed that you chose an acting career?

No my parents were very supportive and loving but they were scared and still are to a certain extent–[expressing] concern about the perils of Hollywood living. As many projects that I’ve done, I still feel young in this [biz]. Ultimately nobody thought of this career for me. I didn’t even think of it until I was 19! And living the life that I do it was the wrong field for me to get into because I’ve always been so private (Laughs).

Since you’re so low-key, what’s the one thing the world will never hear that Michael Ealy has done?

(Laughs) Ah man! I don’t know because the way people make up stuff you might hear something about me that isn’t even true. I can say I don’t want to be put in that position, but unfortunately, when you’re in the [public eye] sometimes you are.

When the tall tales begin, how do you combat those rumors?

Well, I think it’s healthy to disregard them, but if some are slanderous then I might need to address it. (Laughs).

Hollywood has been good to you. When it comes to addressing personal investments what’s your advice on the best of them?

I can only speak for me and the best and worst has been the same thing: my house. When I look at the numbers I don’t advise anyone to buy. If you have the means to buy a house outright then pay it off. [Paying] a 30-year mortgage doesn’t make any sense. It’s not the same real estate market anymore. I’m no longer buying into the American dream. It has changed forever.

Well what’s the one thing that you hope your loyalists will always remember about you?

Michael Ealy: I hope that they’ll remember the man not the actor.