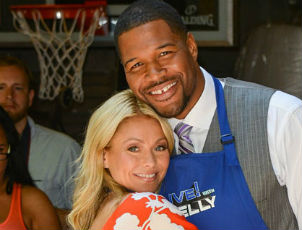 Former NFL player Michael Strahan will reportedly be announced as Kelly Ripa’s co-host on Live! with Kelly, according to staffers at ABC in New York City. It is reported that Strahan’s rep was seen grinning outside the show’s studios, indicating that the Super bowl winner’s tryout for the hosting gig back in June proved to be a success.

Strahan, who is retired from the NFL Giants, was one of many celebrity faces who joined the morning seat alongside Ripa since long-time talk show host Regis Philbin retired afterÂ  over 20 years in 2011. Many celebrities were rumored to replace Philbin, including Anderson Cooper and Ripa’s husband, Mark Consuelos.