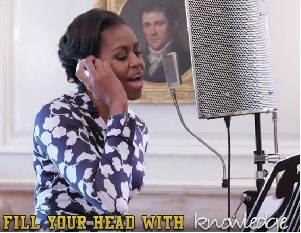 As if dancing to Bruno Mars “Uptown Funk” on the Ellen Show wasn’t enough, First Lady Michelle Obama has just released a rap video to prove that she’s one of the coolest First Ladies ever.

Teaming up with the Website College Humor, the Gregory Brothers and SNL’s Jay Pharoah, FLOTUS dropped a music video today as a fun way to encourage kids to continue their education.

“South Side Chicago, we all know, we had to do overtime every night to make it to tomorrow. And everyone could really make their dream true. Hey kid listening in Michigan, that could be you,” Obama raps.

The video is released in support of the White House’s Better Make Room campaign that FLOTUS launched earlier this year to get teens ages 14-19 to realize the benefits of going to college. The campaign also aligns with FLOTUS Reach Higher initiative, which is also put in place to inspire the youth to further their education after high school.

“I believe that education is the single-most important civil rights issue that we face today. Because in the end, if we really want to solve issues like mass incarceration, poverty, racial profiling, voting rights, and the kinds of challenges that shocked so many of us over the past year, then we simply cannot afford to lose out on the potential of even one young person. We cannot allow even one more young person to fall through the cracks,” Obama said in a statement about the launch of the initiative.

From her social media campaign encouraging people to rock their college gear, to her many youth-focused initiatives and now music video, it’s clear that FLOTUS knows how to make education look cool.

To check out Obama’s rapping skills watch the video below.