Miguel's Legdrop on Fan May Cost Him Some Money 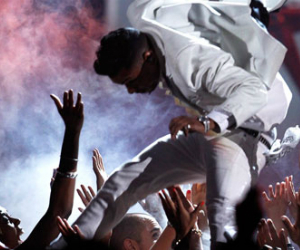 One miscalculated jump may cost Miguel a couple of dollars!

If you didn’t know, at The Billboard Awards earlier this month, Miguel, while performing live, made an attempt at a shocking leap and in motion, his leg accidentally clipped 2 ‘adorning’ fans in the head. The shocked woman, Khyati Shah, initially forgave the singer after the show, but seemed more starstruck than anything. As far as Miguel was concerned, that was the end of it.

Now, 2 weeks later, it’s being reported that her condition hasn’t gotten better and it doesn’t look good for Miguel as she is now considering legal action. Her attorney, Vip Bhola, has stated that Shah is experiencing “difficulties” now that the “star-struck … shock” has worn off. “We will determine [how to proceed] after we have feedback from medical providers,” Bhola said.

Well, if Miguel didn’t see that coming, it will be right in his face soon enough!

Read the full story at The Guardian