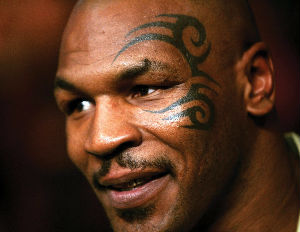 Mike Tyson has found his niche in acting since he hit the big screen playing with tiger’s in the 2009 blockbuster, The Hangover. Since then, the former boxer has made several television and film appearances as himself, and even thrown in aÂ role or two in between, but now Tyson is taking over primetime television.

TheUrbanDaily reports that Mike Tyson will guest star on an upcoming episode of “Law & Order: SVU,” alongside Mariska Hargitay and Ice-T, as Reggie Rhodes, “a murderer on death row whose violent actions may in part be the byproduct of a horrible childhood.â€ His character’s case is said to grab the attention of Detective Benson (Hargitay) and D.A. Bayard Ellis, played by recurring guest star, Andre Braugher.

This role is much different from his comedic roles on the big screen, but will give fans insight into the acting skills he’s acquired over the past couple of years.