Our nation’s strength rests on ingenuity and creativity of the American people. Across our country, almost four million minority-owned firms exemplify this spirit as they create jobs, develop new products and services, and promote community and economic development. The growth and expansion of these businesses is an increasingly critical part of our economic recovery and long-term prosperity.

Those were the words of the proclamation signed by President Barack Obama to launch the 2009 Minority Enterprise Development Week, better known as MED Week. During the conference’s first full day, the same sentiments were echoed by some members of the administration’s team charged with the expansion and evolution of minority business. The collective goal of Commerce Secretary Gary Locke, Commerce’s Deputy Chief of Staff and Senior Advisor Rick Wade, and Minority Business Development Agency (MBDA) National Director David Hinson, among others, is to bolster the nation’s four million businesses which generate revenues of $660 billion and employ 4.7 million workers. In fact, Hinson believes if his agency can help these firms achieve “economic parity” by growing the percentage of companies owned by minorities to match their representation in the US population then such enterprises would produce $2.5 trillion in annual revenues and employ 16 million workers.

Before that objective can be met, however, the agencies within Commerce must ensure that minority entrepreneurs gain access to infrastructure contracts that’s part of the Obama recovery program; obtain capital in a tight credit market; and position firms to become players in “new economy industries” like renewable energy. Asserts Locke: “It’s our view that the economic recovery will not be successful unless minority business also shares in that recovery and are part of the turnaround and growth. It’s important for minority business to succeed if we want all of America to succeed.”

In three separate interviews with Black Enterprise Magazine Editor-In-Chief Derek T. Dingle, Locke, Wade and Hinson discussed the administration’s ambitious agenda and the future prospects for minority business. The following are excerpts from those interviews: 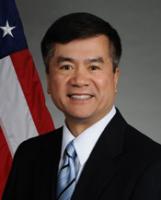 Small Business Administrator Karen Mills and I have been asked by the president and vice president to lead all of our cabinet activities to ensure that with all this stimulus money going out, minority firms are front and center and getting their fair share of those contracting opportunities. So in the next 90 days, we are going to have some 200 workshops and opportunities to inform minorities across the country about the contracting opportunities. We’re making it a high priority that minority businesses receive their fair share of dollars and are able to be part of this economic recovery.

We don’t really have firm targets but we are going to be using the power of the administration to inform the states that we really want minority firms to be part of the contracts and subcontracts whether its building a bridge, repairing roads, constructing dormitories and college laboratories or remodeling schools. The federal agencies will be working with all cabinet secretaries to make sure minority businesses are considered, encouraged and given the opportunity to compete and hopefully win some contracts. (See the full transcript of our exclusive interview.)

WADE: FINANCING IS AN IMPERATIVE

These businesses need access to capital to be able to survive. I spent a lot of time in Detroit as part of the Auto Recovery Task Force and the one thing I heard over and over again from suppliers is that they need capital and they need it now. They’re all understanding that they have to reinvent for the future but it’s about keeping the doors open. The president has made a commitment through the SBA and freed up some $15 billion in financing as well as through the MBDA. Our new MBDA director brings to this conversation a wealth of experience in how to create successes through creative financing, through partnerships, through acquisitions, through mergers. Partnerships are critical in this whole process if we want to create big business success stories we want to be engaged in. (See the full transcript of our exclusive interview.)