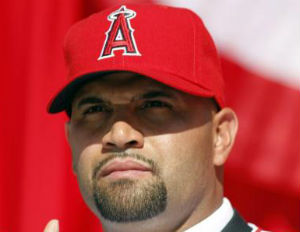 Major League Baseball’s fifth Jackie Robinson Day is being celebrated today after the release of the biopic “42.”

The biopic grossed more than any other baseball related movie in film history.

Today, we have a quote from one of baseball’s biggest stars, Los Angeles Angels of Anaheim first baseman, Albert Pujols. He discusses the importance of the man who broke baseball’s color barrier.

“Jackie is like Roberto Clemente to us, the way we admire him and carry Roberto in our hearts. I never had the chance to see him play but I’ve talked to other fellow ballplayers. I’ve spoken to different people that played against him and with him and they’ve told me that he was a tremendous person and never took the game as a joke and Jackie was the same way.Â He knew that in that era, it was an era where there was a lot of racism but he had the opportunity and God gave him the blessing.”