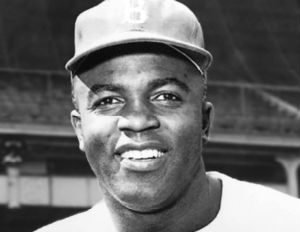 Last week, Major League Baseball announced the details for their upcoming 2015 Civil Rights game between the Los Angeles Dodgers and the Seattle Mariners, to be played on Wednesday, April 15th. This is the ninth game of its kind, and the latest in an annual tradition that began in 2007. The April 15th date is especially significant in that it also marks the seventh annual recognition of ‘Jackie Robinson Day’ by the MLB; according to the league “This year marks the 70th anniversary of Jackie Robinson signing his first professional contract with the Brooklyn Dodgers organization in 1945, which was the first step toward his eventual breaking of the color barrier on April 15, 1947.â€

As has been the case since 2009, all players and personnel on-field will acknowledge the Hall of Famer Robinson and his achievements by donning the number 42 for the duration of the game, and ballparks around the league will also feature various on-field, pre-game ceremonies.

[Related: 10 Things You May Not Have Known About Jackie Robinson]

As the site of the special Civil Rights game, Dodgers Stadium will also play host to the MLB Beacon Awards, which recognize individuals whose lives and actions have been emblematic of the spirit of the civil rights movement. This year the award is being presented to the Hall of Fame athlete, entrepreneur, philanthropist, and Dodgers owner Earvin “Magicâ€ Johnson, as well as civil rights activist and two-time United States Presidential Award Recipient Dolores Huerta. There will also be a Special Honor for Hall of Famer and MLB Senior Advisor and Honorary American League President Frank Robinson, in recognition of the 40th Anniversary of him becoming Baseball’s first African American manager. Robinson managed his first game for the Cleveland Indians back on April 8, 1975.

Magic, Dolores, and Frank will also be participants in the Baseball & Civil Rights Movement Roundtable Discussion – alongside Jackie Robinson’s daughter and the Vice-Chair of his foundation, Sharon Robinson; Doctoral student at UCLA’s Department of Urban Schooling Brian Woodward; and MLB Ambassador for Inclusion Billy Bean. The panels’ discussion will revolve around the pivotal role baseball played in the civil rights movement and the game’s continued presence as a social institution in American society. It will be moderated by Harvard Law School Professor Dr. Charles Ogletree, and will be streamed on MLB.com and Dodgers.com prior to the Civil Rights Game at 2:00pm PST.

Coverage of the actual game will air nationally on ESPN2 and via the WatchESPN app, with coverage scheduled to begin at 7:00 p.m. PT (10:00 p.m. ET) as part of the network’s Wednesday Night Baseball package.