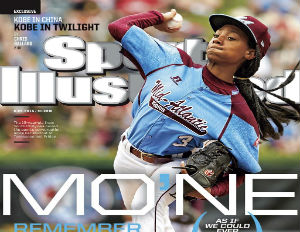 Back in August, the sports world was certainly delighted to read crowded headlines featuring a 13-year-old little leaguer named Mo’Ne Davis that had a violent 70-mph fastball.

Jaws dropped when the self-assured girl graced the cover of Sports Illustrated‘s August issue. In fact, some copies of that issue featuring Davis,  the first girl in the history of the Little League World Series to pitch a shutout in the tournament, turned up for sale on eBay. The auction had ballooned to $500, according to an article published in USA Today on Aug. 22. An autographed baseball signed by Davis also sold for $510 on the website. Even her Carolina blue and maroon Taney Dragon’s team uniforms boosted sales for New York-based Modell’s Sporting Goods Inc., who sponsored the team. The store sold over 1,500 items. According to Forbes, Mike Heffner, the President of Lelands, the oldest sports auction house in the United compared Davis’ stock to New York Yankees star Derek Jeter. That was all in August.

On Sunday, November 30, Davis wearing an all-while outfit, skirt, lace shirt and gold-shimmering kitten heels joined boxer Laila Ali, also in white, on stage to present an award at the Soul Train Awards. Davis also had a presidential experienced. First Lady Michelle Obama and a bundled up Davis read “The Night Before Christmas” to a group of school children on Dec. 4. Financial experts estimated that Davis earned around $100,000 this year and will probably generate more next year.