Monday Motivation: How To Keep Going, From A 102-Year-Old Runner 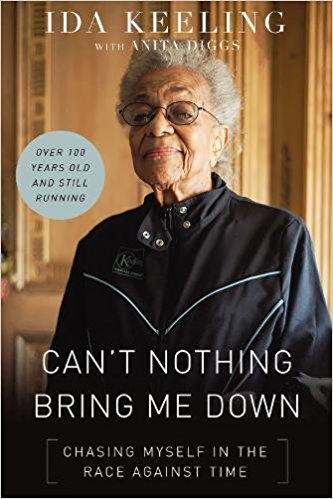 Ida Keeling’s life story is rife with motivation. The 102-year-old began working at age 12 to help provide for her immigrant family, lived through the Great Depression and the civil rights movement, raised four children as a single mother, and then set world records as a runner—in her 90s.

Keeling is sharing that inspiring story in her memoir, Can’t Nothing Bring Me Down: Chasing Myself in the Race Against Time, which will be released next February and is available for pre-order this month.

“I was feeling so blue,” Keeling writes of the period after her two sons were murdered, less than three years apart.

“My psyche had slowed down and it felt like I was moving around in a bowl of thick oatmeal. Not a pleasant feeling, but me and the icky sensation were becoming well acquainted. Too well.”

Keeling credits her daughter Cheryl, herself a runner, with saving her life by pleading with her to run for the first time at the age of 67. Running is “an answer to grief, stress, obesity, bad health, and bad habits,” Cheryl writes. “It is a survival tool.”

More than 30 years later, Keeling is sharing some motivation from her journey:

Stick it out, even when it hurts

“It was my first race. I took off and all these people was rushin’ past. It felt like somebody pulled a sheet off me; it was horrible,” Keeling writes, “but I said I can’t slow down now. I got to keep going.”

“I started thinking this is too much, then all of a sudden, I started picking up a little speed and I thought, gee maybe this is good for me.”

The way you talk to yourself matters

“The gun sounded, and I was off, putting to shame younger couch potatoes, excuse givers, or plain old slackers who might’ve been well accustomed to convincing themselves that they were too over the hill to compete,” Keeling writes.

“That’s the thing about feeding yourself negative information. It always slows you down.”

Surround yourself with the right people

“I absolutely refuse to tolerate drama,” Keeling writes, adding “I just don’t have time for people who live only to cause trouble.”

“Just find the nice, kind, supportive people and bring them into your circle. Let the others find God in their own way and in their own time.”