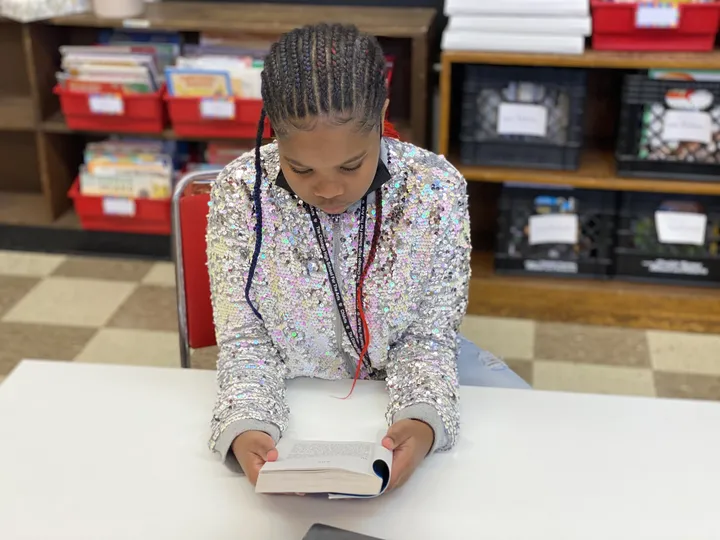 A public charter Montessori school on Chicago’s South Side is fundraising $10,000 to bring Black-centered books into its classrooms.

Montessori School of Englewood, made up of 420 students, is 98% Black and free to children living within the Chicago city limits.

Administrators at the school launched the fundraising initiative after one bright student, 13-year-old Kinadee Jordan, expressed a desire to read more stories with Black main characters, The Chicago Sun-Times reported.

“I know there are Black authors in the world,” Jordan said. “I want books on my culture.”

The eighth-grader is currently reading Inside Out & Back Again by Thanhha Lai, a novel about a young girl whose family migrates to the U.S. during the Vietnam War. Jordan, who’s attended the Montessori School of Englewood since the first grade, deeply relates to the story.

“No wars have happened since I was born, that I know of, but it’s just violence in the community, violence in the world, that I wish I could migrate away from. But I can’t,” she told The Chicago Sun-Times. “It haunts me every night. I feel like it follows me, like the clouds.”

The school’s executive director, Rita Nolan, and board member, Quilen Blackwell, put their heads together following Jordan’s request and came up with Books and Blooms, an initiative to raise $10,000 to purchase books featuring Black and brown main characters.

“What we’re trying to do is make sure that we have the resources to be able to make sure from our kindergarten on up that…books with the African American child in the center, not just the periphery,” are in each classroom, Nolan said.

Blackwell—who employs at-risk youth at his flower shop—Southside Blooms, supports the effort by donating 20% of revenue from purchases at southsideblooms.com to the school. Customers can participate in the fundraiser by using the code “BOOKS” on the site.

“One of the challenges that we have is when people donate books, they give us their scraps, and that’s a big thing that we want to try to change,” Blackwell said. “We want the school and students to have more agency over the kind of books that they want.”

Noland shared that the books will be purchased from minority-owned bookstores.

Jordan said minority-focused books would help others understand what it means to be a Black girl while showing Black girls they can change the world.

“Girls that are going to be in our next generation should realize, ‘I’m really not in a good world right now,’ and they should look at this not as a warning, but as inspiration to keep trying and letting the world know,” she said.

The avid reader hopes to inspire others with a memoir of her own someday.