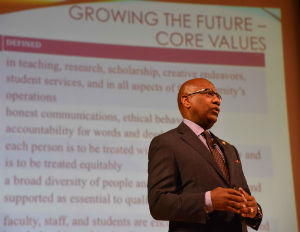 An open letter to Donald Trump, which was signed by 110 college presidents, urges the president-elect to condemn the acts of bias, intimidation, and hate that occurred immediately after the election

Last week, I spoke with David Wilson, president of Morgan State University–the alma mater of Black Enterprise Founder, Chairman, and Publisher Earl G. Graves–about Wilson’s decision to add his signature to the letter. He replied by way of email.
Black Enterprise: Why did you sign this open letter to Donald Trump?

Wilson: Given the tenor of the campaign, I was pained to witness the low level of political discourse, and that reality made me fear for the future awaiting our students and young people generally. When the opportunity was presented to join a chorus of higher education voices in a unified call for civility from our president-elect, I did not decide to participate without due consideration. It was with our students in mind that I elected to stand in solidarity with the other presidents.

BE: One of Trump’s campaign themes was safety, yet after Trump won the election, incidents of harassment went up, suggesting that under his watch (some) Americans may be less safe. What is your perspective?

Wilson: There is ample reason to be concerned. Since the election, there has been uneasiness across the nation. We’ve experienced this feeling on our campus from the student body. There was an immediate need to reassure them that Morgan is a “safe intellectual space,â€ and that they matter. That is why I felt compelled to support this open letter.

BE: According to the Southern Poverty Law Center, since the election, the number of anti-black incidents of harassment or intimidation rank second to anti-immigrant incidents, which is number one As the president of a historically black university, what is your comment about this?

Wilson: As one of the seven presidents leading a historically black college or university to be included among the 110 leaders supporting this letter, I felt it was necessary to speak out against the divisive voices, threats, and vile actions that historically have sought to undermine the country from embracing unity, decency, inclusion, and competitiveness. Our participation in supporting this letter is as much an affirmation of [Morgan’s] values and to protect those values, as it is a call for the president-elect to disavow the ugliness that is occurring.

BE: What should Trump do to foster a climate that respects our country’s democratic values?

Wilson: In the end, it all comes down to leadership and setting an example. One way to begin the process is by letting citizens know what this nation is not about, and what it will not stand for–and that is bigotry, hatred, sexism, racism, and xenophobia. These are not the things that make America great.

To see all the signatories and to read the letter, visit this website.