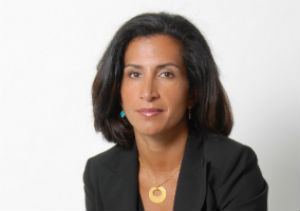 Mori Taheripour will be a panelist for the 2013 Black Enterprise Women of Power Summit hosted by State Farm.

When we called Mori Taheripour Thursday afternoon, she couldn’t have sounded more chipper. She’s the Senior Adviser for Sport for Development at the US Agency for International Development and a faculty member at Wharton‘s Legal Studies and Business Ethics Department, where she teaches Negotiations and Dispute Resolution. She’ll join us Friday, Jan. 25 for our #WomenOfPower Twitter chat on the complex topic of negotiations. We soon found out why she sounded so happy (Niners fan), how women and men negotiate differently and the most important factor when it comes to being successful at the negotiating table.

BE.com: We’re reading about your work with the NFL — I’ve got to ask who your favorite rookie was to watch this year?

Taheripour: Well, he’s not really a rookie (in his second year in the league) but I’m a 49ers fan so I’m going to have to mention Colin Kaepernick regardless. He’s really been able to show his talent with the opportunity he’s gotten to play and he’s done some amazing things. I’m living in D.C. so how can I not say Robert Griffin III? It was definitely the year of the young quarterback. And I’m going to New Orleans for the Super Bowl, so I couldn’t be more excited.

With rookies, what’s the thing they’re always surprised to learn?

In the Wharton/NFL Program, we have had a few rookies, but we have a lot of seasoned pros as well. Some have only been in the league for a year, some 3 or 4 and other have had 13-year careers.Â Â When we see rookies in the program, they have only been exposed to the rookie symposium through the League, which is designed to help the rookies adjust to life at the pro level and even think about life after football.Â Â The vast amount of information they get is like drinking from a water hose.Â So when a rookie attends the Wharton program, they can obviously be more focused, over a few days, on business education.Â Â Rookies and veterans alike are eager to learn about opportunities to protect their assets, how to evaluate long-term investments and not get caught up in “get rich quickâ€ schemes, and how they can make better decisions overall in negotiations, investments and estate planning.

I have a lot of friends who go into salary negotiations and their only explanation is that they just kind of blew it, but they don’t know why – how do most people get it wrong?

I think in general people feel very anxious when they’re going in whether it’s a man, woman – it doesn’t matter. Many people consider them to be situations ridden with conflict. They’re going to be asking for something, the other people are going to ask for something completely different. There’s a pervasive notion that negotiations are a conflict-based situations, and that’s just not necessarily true. Now, sure, some are harder and more intense than others, but they don’t have to be confrontational. I teach my students that negotiations is conversation and communications between you and the other party and not a situation where they have to feel anxious, fearing conflict.

What do you teach about how to get over that?

Preparation is probably more important than anything else. Prepare to ask for what you want, but I teach about understanding the other side, realizing their potential interests, so that you go into these situations, you’re prepared to have a collaborative agreement when you’re looking for a common ground. It doesn’t have to be intimidating or conflict-oriented. If you think about negotiations in a different way, you’re more empowered to do better and succeed and get what you’re seeking from a situation. A lot of time it’s not what you ask for, but how you ask for it. You have every right to set high goals and ask for what youwant or deserve in a negotiations.Â Â With women, we often fear being too aggressive or forceful.Â Â When men insist on what they want in negotiations, they’re considered confident or self-assured.Â Â In many ways, I actually think women can be better negotiators.

Register for the Black Enterprise 2013 Women of Power Summit here. Use the code DGTWPS for savings.