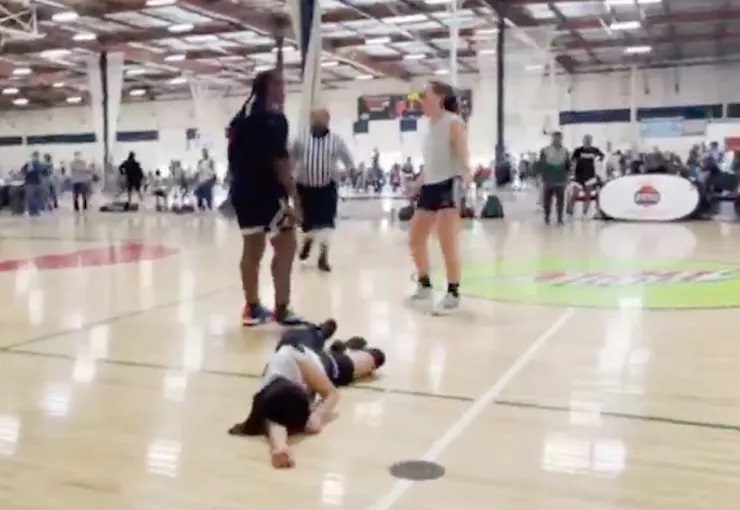 A viral video clip of a mother yelling at her daughter to hit an opponent during a basketball game, and the girl following through by striking the opponent, has left the mother charged with misdemeanors.

According to NBC Los Angeles, the incident, which took place last month, was posted by the girl’s mother, who was sucker-punched during the game. In the video, you can hear the basketball player’s mother yell to her daughter, “You better hit her for it,” before her daughter strikes the opposing player.

The young girl’s mother, 44-year-old Latira Shonty Hunt, has been charged with misdemeanor counts of contributing to the delinquency of a minor and battery. She faces up to a year in jail.

“This happened to MY DAUGHTER at her game yesterday. There is absolutely no place for something like this in basketball; I don’t care how famous you are!! This mom told her daughter to “go and hit her,” and my kid gets an unprovoked sucker punch.”

“It is unconscionable that a parent would encourage her child to engage in violence during a sporting event,” Orange County District Attorney Todd Spitzer said in a written statement. “Youth sports are invaluable in teaching our children discipline, teamwork, and sportsmanship. But a win at all costs mentality that is completely devoid of fair play, respect, and civility is disgusting. We as parents have the fundamental responsibility to raise our children to be good human beings who treat others with kindness and humanity.”

The girl who threw the devastating blow is the daughter of former Chicago Bulls player Corey Benjamin. He issued a statement apologizing to the girl, her family, and everyone who witnessed the assault by his daughter. “As a father, I’m shocked and disappointed at my daughter’s behavior as this is not a reflection of the values and standards that my family holds.”

The victim’s mother, Ham, stated that Benjamin’s daughter was involved in another incident where she tried to attack other opposing players this past September.