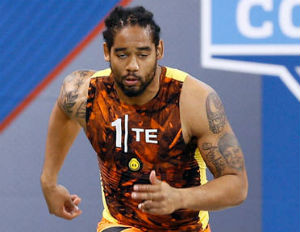 Justice Cunningham pictured at the NFL Combine earlier this year. He was recently promoted to the Colts roster.

Justice Cunningham, a rookie tight end out of South Carolina was promoted to the main roster from the practice squad. Mr. Irrelevant is the dubious nickname given to the last pick in the NFL Draft. For the past two years, that pick has gone to the Indianapolis Colts.

Now that he’s apparently no longer irrelevant, who is this guy anyway? Cunningham is a 6-foot-2, 258-lb tight-end. He caught 50 balls for 581 yards and just one touchdown for Steve Spurrier at South Carolina. All of that seems unimportant now; clearly the Pageland, S.C. native did something to impress head coach Chuck Pagano and his coaching staff. He was signed to the practice squad on Sept. 2.

A Twitter account apparently belonging to him had yet to reflect the day’s good news*, but that should change soon, too.

*Update: Cunningham just updated his Twitter, saying, “Thanks for all the support #Blessed” — with a link to this picture from his Instagram.