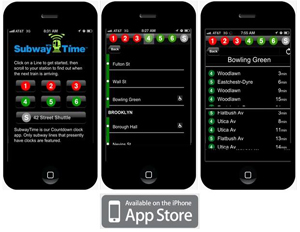 New York City straphangers have somehow figured out a way to determine when their train is coming (averaging expectancy times, using public transportation apps, and following morning television shows–the whole nine), but the Metropolitan Transportation Association (MTA) is taking the task off their plates. MTA announced on Friday a smartphone app that will provide train-arrival times on seven of the city’s 24 lines.

Available to passengers with iPhones and iPod Touch devices, Subway Time will help the city’s subway riders better plan out their trip. While there are third-party apps like HopStop and NYC Mate, the newly-released app relies on the MTA’s signal data for train arrivals, making those estimates more accurate.

The app seems to be worth the download, but users should know that the app will only work where there is an Internet connection. In other words, it’s only useful at above ground stations and the few stations that have Wi-Fi.

Although MTA’s efforts to enhance the commuter experience with the app announcement, installation of new signals and other renovation projects are welcomed, they do come at a cost. The Wall Street Journal is reporting that the new signals were installed at a cost of more than $228 million over 11 years, according to the MTA. With the recent subway fare increase, how will this move affect straphangers’ pockets?

There are plans to release Subway Time on other platforms in the near future.