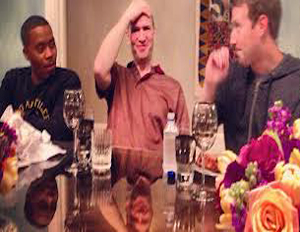 This past weekend, photos surfaced of a dinner between Queens rapper Nasir “Nas” Jones, Facebook founder Mark Zukerberg, and billionaire venture capitalist Ben Horowitz, who was recently outed as an investor for the website Rap Genius.Â  Of course, no one really knows what actually was discussed at this dinner (or whether Zuck can recite all 16 bars of “NY State of Mindâ€) but, with that much power in the room, we can only imagine what types of deals were going down. So until we get more information, let’s speculate about what tech ideas came from this meeting as well as try to figure out how our invitation got lost in the mail:

There is no doubt that Apple climbed to the top of the smartphone market on the strength of it’s iTunes Music Store. Insiders in Silicon Valley have rumored that Facebook would introduce its own phone for a while now. Even though Zuckerberg has vehemently denied such a thing exists, a smartphone featuring a music store and social media integration could pose an interesting challenge to the marketplace.

It’s quite ironic that MTV abandoned the music video a few years ago because now, thanks to video platforms such as VEVO and YouTube, music videos are more popular than ever. As viewing shifts from TV to online, there exists the need for a pure digital music channel, integrating music videos, original entertainment, and interactive social media. With more and more young people “cutting the cordâ€ from traditional cable, a network with the strength of Facebook could dominate the new market.

Let’s face it, even with emerging technologies, most record labels these days are still burdened by the status quo. Blogs and YouTube have become the new tastemakers while most labels are still wedded to traditional physical distribution, even in the wake of massive declines of CD sales. Nas, Zuckerburg, and Horowitz could create a record label that puts digital first instead of on the backburner, and with the power of Facebook’s 600 million users such a label could really break recording artists.

Everyone has been talking about streaming music services such as Spotify and Rdio (and a rumored service from Apple debuting in 2013). But even with all of the buzz, streaming services still only make up a fraction of total music consumption. Utilizing Facebook’s powerful user base, a music distribution platform from Zuck and company could push music streaming into the mainstream.

Facebook may be great for connecting with your college buddies, but it’s always fell behind when it came to connecting recording artists to their fans. In fact, the recent introduction of Facebook’s timeline made it more difficult for fans to find an artist’s tour dates, videos and music. With the recent redesign of MySpace as a music powered social network, Facebook could step its game up and provide a truly viable social portal, allowing artists to stream, sell, and distribute their music online.