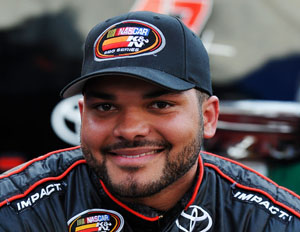 Ryan Gifford, 24, a NASCAR Drive for Diversity participant, got his first win at the K&N Series Widow Wax race in Richmond Va. this week. (Image: Rainier Ehrhardt/Getty Images for NASCAR)

NASCAR and African Americans may not always be something many minorities think about in the same sentence, but NASCAR’s Drive for Diversity programing is changing the game.

Ryan Gifford, a 24-year-old Rev Racing driver in the program from Winchester, Tenn., gained victory at the NASCAR K&N Pro Series East April 25 in Richmond, Va. This was his first win at the K&N. The promising phenom has had four seasons with the Drive for Diversity Program and plans many more.

Gifford made a comeback after a defeat in last year’s tournament as a result of a cut tire. This year he qualified 11th and was able to out drive racers Brandon Gdovic and Cole Custer. His teammate Mackenna Bell was able to place fifth.

He became the fourth driver Rev Racing to win a race in the series forÂ  since the organization began to field cars for NASCAR’s Drive For Diversity in 2010. Gifford has been with the team since its first year and was making his 44th career start.