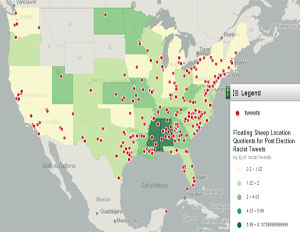 Geographers at Floating Sheep, a group of academics who previously mapped Christianity, beer drinkers and the best pizza in the United States, decided to take look at racism as a response to this year’s presidential election and President Barack Obama‘s victory.Â  And their discovery may not be shocking to many Americans who believe we’re not yet in a post-racial society.

Unsurprisingly, Michigan (0.6), Pennsylvania (0.7) and New Hampshire (0.8) had some of the lowest LQs and the three states with the highest LQS were located in the historically racist southeast: Alabama (8.1), Mississippi (7.4), and Georgia (3.6). The other findings on the map that may be worth noting were that North Dakota and Missouri both had low LQs, as well as Oregon and Minnesota.

Analyze the map to see where your state ranks.