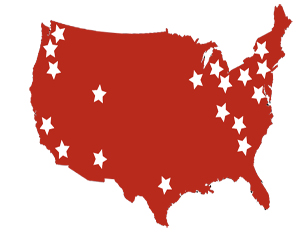 Hacking just scored some cool points with the federal government.

The White House announced on Tuesday the National Day of Civic Hacking, which is scheduled to take place on June 1-2, will include citizens, software developers, and entrepreneurs from all over the country who will work with one another to create, build, and invent new solutions using publicly-released data, code and technology to solve challenges relevant to the nation. This data comes from government agencies such as The Census Bureau, The Department of Labor and NASA.

Thus far, 27 cities have planned events like a hackathon or brigade meetup where hackers alike will have the opportunity to join forces to get hacking and improve their community. Big cities with a growing tech influence such as Austin, New York City and Chicago are on the list, as well as up-and-coming tech hubs like Detroit, Philadelphia and Syracuse.

In addition to the U.S. government, the National Day of Civic Hacking is a partnership involving Code for America, Random Hacks of Kindness and Innovation Endeavors. However, many more organizations are slated to bring hacking to their local communities in honor of the national event.

Kat Calvin, co-founder of Character’s Closet and leader behind BlackGirlsHack (soon-to-be-known as Blerdology), is excited about taking part in the nationwide day of hacking. “The idea of bringing together hackers from all over the country to build innovative projects, explore world-changing ideas and provide more access to data and technology to strengthen our country and community is incredible,â€ said Calvin. “I can’t wait!â€

Dedicated to teaching female blerds–black or brown nerds–to be startup founders and programmers, BlackGirlsHack are confirmed to take part in the National Day of Civic Hacking. “We’re all about bringing the black tech community together to support each other and black-founded startups and non-profits, and we’ll be putting together a really innovative way to come together and hack, innovate, or maybe even just have a giant blerd party!â€

There are several ways techies, hackers and non-technophiles can join in on the fun:

Decide what type of event you’ll host in your town: a brigade meeting, block party, hackathon, or your one-of-a event. Be sure to sign your event up on the official site.

Submit data, code or an idea to share with the masses.

BlackEnterprise.com reached out to the White House for a comment, but have yet to hear back.