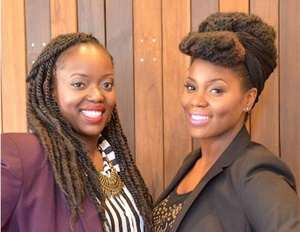 What do women of color, business, and beauty pageants have in common?Â To some, the answer may be very little.Â However, you may get a very different answer from the co-founders of Miss Naturally Crowned Carolina, touted as Columbia, S.C.’s first natural hair beauty pageant.

Boyd says, “Not only did we aim to promote positive dialogue and images of naturally afro-ethnic textured hair, but we felt a responsibility to last year’s contestants to help them develop personally. From the beginning of the pageant process to the end, these women completely transformed. No matter how many seats we sold out or the amount of money we raised, that accomplishment was the silver lining.â€

After the stage lights dimmed, Boyd and Ochola witnessed something even greater happen among the twelve courageous ladies who competed for the crown: half of the inaugural contestants went on to pursue their own businesses. Among them, grand prize winner, Chanelle Johnson of Manning, S.C., used the first place $1,000 award to launch her own endeavor, C.Heart Photography. Second runner-up India Hill is pursuing a freelance blogging career at TheReddBlogger.com, and former contestant Jasmine Moore has officially launched a booming at-home baking business.

Against this backdrop, Boyd and Ochola capitalized on the trend with this year’s pageant theme, “Beauties in Business,â€ making Miss Naturally Crowned Carolina the only event of its kind to wed support for natural hair acceptance with black women in enterprise. Boyd, a 2009 graduate of Spelman College, received her MBA in 2012 from North Carolina Central University. She is also the owner ofÂ â€‹littleblandbrands creative studio, a transformative branding and guerrilla marketing firm based in Columbia. Ochola, a 2010 graduate of Georgia Tech, earned her MBA from Georgia State in 2012. She is currently a full-time industrial engineer for a private engineering firm in Atlanta. Together, they also plan to open Quench Natural Beauty Boutique, a natural hair beauty supply store in Columbia.

The contestants selected for this year’s competition are more than the sum of their curls and coils; They are budding business owners with the opportunity to positively impact their local economy.Â OnÂ Saturday, April 11, in Columbia, six savvy naturalistas will pitch their new or existing business ideas for a $1,000 grand prize start-up investment. These future business leaders include a dessert bar connoisseur, wellness-inspired natural hair app developer, fashion forward t-shirt designer, exotic smoothie savant, media production maven, and a dog lover with a soft spot for bully breeds.

“This year, I’m most excited to bring to the South Carolina community an opportunity for naturalistas to showcase the brains behind the kinks, coils, and locs,â€ Ochola says.